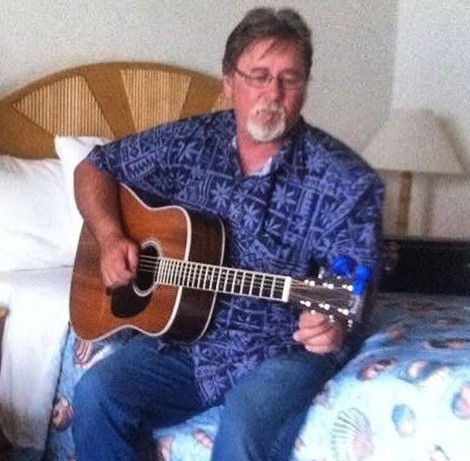 Jim was born on September 8, 1957 in Riverside, California to James and Earlene Parker and went to be with the Lord at age 64 on November 13, 2021 in Boise, Idaho.  He grew up in Empire, California with his mom and his brother Rod.  After his grandma taught him how to play guitar, he spent many hours playing music with his extended family in the band “Homemade Jam.”

Jim started riding motorcycles at the age of two, which triggered a life-long love of anything with wheels. He liked the adrenaline rush of living on the edge.

For more than 30 years, Jim was in the Laborer’s Union, doing heavy construction, building dams, bridges, and roads. Jim was gifted with incredible mechanical skills, to the delight of his friends. No matter where he lived, he was the “go to guy.”

When he became a Christian in 1991, he was on fire for God from day one. He served as President and Chaplain in the Christian Motorcycle Association, riding and spreading the gospel for 17 years, using music and muppets.  He enjoyed singing and playing guitar as part of the worship team at every church he attended, inspiring others to praise God with all of their heart.

JIm was tenderhearted and fun to be around, bringing a smile to all of his friends. He was known for his sense of humor and heart of gold, living life to the fullest.

Jim is survived by his wife, Kathy, to whom he was happily married for 28 years.  He also leaves behind his brother Rod Parker, three sisters: Lisa Ashworth, Laurie Walton, and Sindi Brantner; three daughters: Connie Phillips, Valerie Telles, and Katrina Ferguson; one son Levi Parker, and nine grandchildren.  His memorial service will be held at River of Life Christian Center in Payette, Idaho on December 11th at 11:00 am.

His memorial service will be held at River of Life Christian Center in Payette, Idaho on December 11th at 11:00 am.