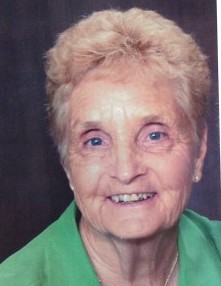 Jackie was born on April 12, 1933 to John and Lena Davis in Kuna, Idaho. She was one of six children. She was raised in Kuna and attended Kuna schools, graduating in 1950.

During high school Jackie met Orval McClure and they were married on June 1, 1951. Six children were born to Jackie and Orval who blessed them with many grandchildren. in 2005 they moved to Nampa after residing in Kuna for 54 years.

While raising their family in Kuna, Jackie and Orval enjoyed many years as members of the Kuna Kave Riding Club and the Ten Mile Riding Club. They particularly enjoyed riding in parades and the field meet competitions. There were many pictures of them on horseback, something they enjoyed doing together.

Jackie was a homemaker her entire life except for a short time in which she worked at the Arctic Circle in Boise, Indian Creek Market, and Super C in Kuna until she retired in 1994 when she began babysitting her grandson Reese. She enjoyed going “junk’in” as daughter Marlena puts it (yard-saling). She also enjoyed lunch once a month with her friends.

Jackie enjoyed sewing projects such as sewing lace on towels and making fancy kitchen towels which she was always giving away. She added beading to socks for her grandchildren and crocheted rag rugs. One of the things Jackie loved most was the family and friends’ gatherings at her home, most often honoring Orval’s birthday or their anniversary, but there didn’t need to be a reason to get together. Her door was always open.

Jackie will be remembered for her smile and giving ways. She will be missed by all she knew but they know she is with Orval and grandson Jason and probably “junk’in” in heaven.