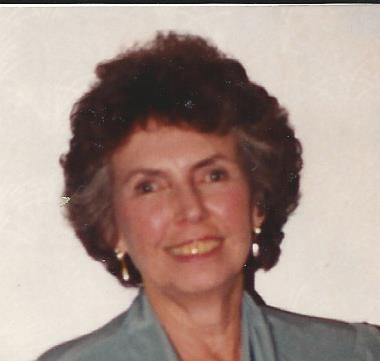 Jean B. McAdams, 87, passed away Wednesday, August 21, 2019 at Good Samaritan Society, Boise Village.  Jean was born May 5, 1932 in Boise, Idaho.  She was adopted at birth by Fred and Monnie Bevington.  She spent her early childhood in Gooding, Idaho along with her adopted brother, Wilson.  In addition to helping around the family’s farm Jean was involved in 4-H and rodeo.  After graduating from Nampa High School in 1949 she moved to Boise and worked for the telephone company; first as an operator and then as an accounting clerk.

On November 28, 1953, Jean married Ralph J. McAdams in Elko, Nevada.  They raised three children, Karen, Elizabeth, and Michele.  Jean was a devoted mother and homemaker. She was involved with school activities and the P.T.A. at the local and state level.  An excellent seamstress, she created stylish clothes and many beautiful dance costumes for her daughters.  Always interested in politics, Jean also found time to work as a volunteer, ringing doorbells, stuffing envelopes, and canvassing for local, state, and national candidates.  Jean became a lobbyist for a state-wide volunteer agency which led to a memorable trip to Washington D.C. to attend the National Legislative Convention.

Jean was divorced after twenty-seven years of marriage in August 1981.  She enrolled as a full-time student at Boise State University from 1981 to 1983.  Jean became an Idaho State Licensed Alcoholism Evaluator in 1983.  In 1985 she was certified as a Chemical Dependency Counselor.  After working for several years in the field of chemical dependency Jean went into private practice.  She was the Owner/Director of a state licensed chemical dependency, outpatient treatment center in downtown Nampa.  Jean retired in 2006.

Jean enjoyed traveling to visit friends and family.  Through the years, she visited Los Angeles, Portland, Seattle, San Francisco, Beverly Hills, Calgary, Salt Lake City, Reno, and Laguna Beach.  Her passion for reading and art history made book stores and art museums priority stops.  City Lights Bookstore and The Legion of Honor in San Francisco were among her favorites.   Jean especially looked forward to annual trips to her youngest daughter’s summer home in Yellowpine, Idaho.  There she enjoyed spending time with her grandchildren and great grandchildren hiking, swimming, and fishing during the day and barbeque and board games in the evening.

A memorial service will be held on Wednesday, September 11, 2019, at Good Samaritan Society, Boise Village, 3115 Sycamore Dr., Boise, at 3:30 PM.  Should friends desire, the family suggests donations be made to Good Samaritan Foundation at foundation@good-sam.com.