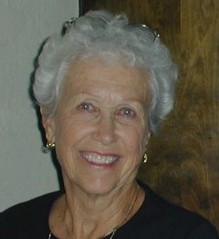 Born August 9, 1932 in Sunland, California to the late Eunice Mallory Blanchard and George Paul Kluger, Janet was raised in the Pasadena area by her aunt, the late Marguerite Blanchard. She attended boarding school at Girls Collegiate in Claremont and then Whittier College where she was swept off her feet by and fell in love with the handsome Buckner New Harris (aka Bucky or Buck).  They were married in 1951 and began a life together in Long Beach, California where Bucky was raised.  While Bucky began his career as an educator and coach in the Long Beach Unified School District, Janet began her new role in life as a wife and mother.  They brought three children into the world, Judy, Buck and Gail, and spent this next chapter of their lives raising their children and otherwise enjoying life in Southern California.  They were fortunate enough to spend summers on the beaches of southern California and in Montana playing tennis, golf, fishing and hiking.  Janet made many lifelong friends in her years spent in Long Beach.

When Bucky retired in 1987, they moved to Boise, Idaho to be closer to family and to the Madison River Valley in Montana.  In Boise, Janet and Bucky bought a townhome and joined the Boise Racquet and Swim Club where they quickly made new friends with their neighbors and fellow tennis, golf and bridge players.  Janet and Bucky continued their annual treks to Montana each May and returning in September.

Janet was a founding member of the hiking club WOW (Women of the Wild).  The club started in 1985 with 3 members and has grown to over 100 members today.  Through her time spent in Montana and her hiking with other WOW members Janet made many friends from around the country who would spend their summers in Montana. Janet, not wanting to let her tennis skills get rusty while in Montana, played USTA League tennis for the Bozeman team for quite a few years.

2008 was the last summer Janet and Bucky spent in Montana.  Janet missed her hiking friends greatly but simply filled the summer months with more tennis, golf, and bridge with her Boise friends.  In 2014 Janet’s beloved husband Buck passed away.  Buck’s passing left a huge void in Janet’s heart and her life.  A day did not go by that she did not miss him.  Everyone who knew Janet, whether friend or family, can smile and be glad that she is now at the oars of their Avon raft guiding it down a beautiful trout stream; Buck in the front, stubbornly casting his beat up Adams mayfly, and Bristol, their beloved yellow lab, lying peacefully in the back.