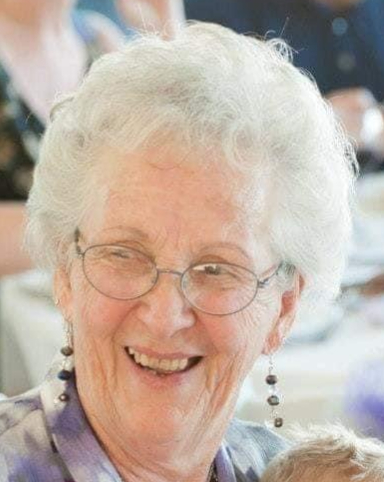 Jane Waggoner passed away peacefully on April 21, 2022. Jane was the eldest of six children, born to Glenn and Gladys Gillespie Fitzsimmons on October 17, 1930, in Larned, Kansas. In the early 1940’s the family made their way west and settled in Fruitland, Idaho.
Jane learned to work early in life. There was always fruit work – pruning, thinning, picking, and packing. During high school she worked at a local restaurant. After graduation she moved to Boise and worked at the Idaho State House in the auditor’s office, she also worked for Louise Shaddock in the Department of Commerce and Development. Later in life she worked at the Central District Health Department.
Jane met Robert C. Waggoner who was looking up at her while she was on a ladder picking apples. They were married on June 9, 1950. Their son Bobby was born in 1952 and Ronnie in 1954. The family enjoyed raising dogs, and breeding and raising Appaloosa horses. They later owned and operated the Lakeside Motel on West State Street for over 20 years. Onlookers on State Street always enjoyed the beautiful spotted colts pastured across from the motel.
Jane was an ardent horseback rider and could be seen often riding in the Boise foothills. The camping and riding trips in the Sawtooth Mountains were special to her. A favorite ride was in 1973 on the Chief Joseph Trail Ride with over 200 riders. Jane was still riding at age 84. She was a long-time member of the Western Riding Club and served on the Idaho State Fair Board in many officer positions as well as secretary of the Idaho, Oregon, and Nevada Appaloosa Association. She also taught Fit and Fall classes at the senior center and volunteered at the local library.
Jane was an avid square dancer and card player and enjoyed weekly outings with good friends. Her Fruitland classmates of 1948 were lifelong friends, and she enjoyed many reunions with them. She always had a camera and has left the family with many memorable photo albums. Jane liked Jane Russel’s attitude. She said, “she was going to die in the saddle and not sit at home and become an old woman.” Another quote of hers was, “When I lose a friend I go out and make two more.”
Jane was preceded in death by her husband, Robert, son Ronnie and his wife Judy, grandson Reed, sister Janeal and brothers John and Jimmie. She is survived by her son Bobby, (Ellen), granddaughter Katie Gates (Don), grandson Nick (Tiffany), and three great grandchildren, Maddi, Colby and Bobby, sisters Joan Hillard and Helen Dyer, and numerous nieces, nephews, and cousins.
Heartfelt thanks to Alasya and Bob West, Lorna and Dennis Howard, and the card ladies for the loving care provided to Jane over the past 18 months. Jane will be dearly missed and will be forever in our hearts. Mother, grandmother, sister and friend, Jane was one of the kindest and sweetest ladies who is now riding horseback above the clouds. A celebration of Jane’s life will take place later this summer.
To leave the family condolences please visit www.bowmanfuneral.com.