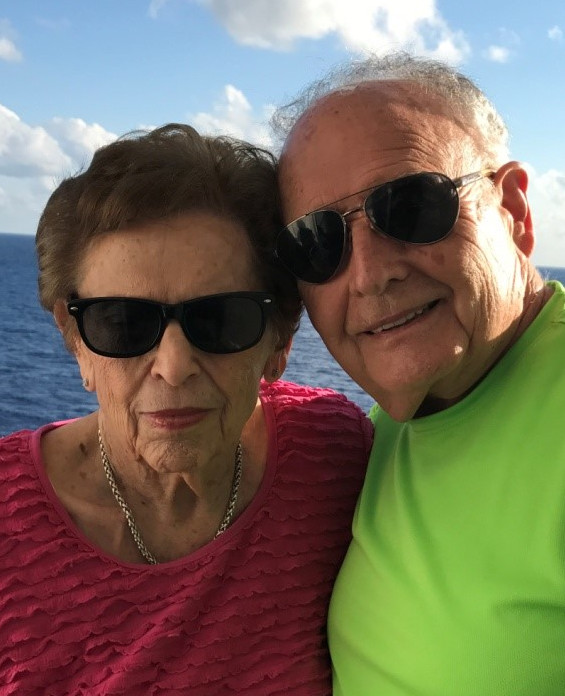 James Richard (Dick) Rowley died peacefully at home on April 9th, 2022.     He was born in Fillmore, UT on April 3, 1932 to James (Jim) Chestley and Margaret Snyder Rowley.  He grew up in a happy home with lots of extended relatives living just a short walk away.   He was a bright boy, who learned early on that extracurricular activities usually excused you from ranch work.  So, Dick learned to play the piano at a young age, excelled in track at school, and was a good student.  He was Student Body President of Millard high his senior year when he fell in love with the best looking and most popular girl in school, Reah Stott.  Dick and Reah were inseparable.   He had known Reah most of his life because their father’s were best friends, both being ranchers, with their ranches being of close proximity to one another.  Dick was to graduate and really wanted to go to college.  It was during the time of the Korean War, but Dick’s childhood injury, shattering his elbow in an accident, kept him from signing up.  Reah still had one more year of high school, so Dick decided to enroll in the University of Utah’s business college, hoping to get a head start on education before returning back to Fillmore to ask that beautiful girl to be his wife.   On June 5th, 1952, they were married and sealed in the Manti, Utah temple.  Dick couldn’t believe anyone could be as happy as Reah had made him.  They were married for 65 years.

Dick was a sweet man. He had a great sense of humor and had happy laughs. For years he dressed up as Santa Claus and visited his grandchildren on Christmas eve. He loved his family. He adored his lovely Bride Reah Knell Stott who passed away 4 years ago. They enjoyed there traveling to their homes in Mexico and Arizona for years.

He was a romantic.

When Dick was a young father, he would carry his sleeping daughters from the car to the house after a trip to grandma and grandpa’s house. He never complained or woke them up or made them walk, even if they were fake sleeping. He loved his extended family. He taught his kids the importance of family. He would take them to his parents, aunts, uncles, sister’s home to become more acquainted with them. His aunts called him little Dicky which made his children laugh.  In the wintertime he would build snow forts for his children and himself and he also would make extra snowballs so they could have a snowball fight with him. They would all laugh as they threw the balls at each other.
He was patriotic and was so happy to have his job with the Department of Interior for much of his life. Climbing the bureaucratic ladder, eventually reaching to the pinnacle of his career and to one of the Department’s highest levels.
He was the family’s favorite go to person for advice and comfort when hurt.  He served in many church callings for The Church of Jesus Christ of Latter-day Saints. His favorite was genealogy and cherished his ancestors. He enjoyed playing the piano and singing with everyone around the piano and organ.  He was a master at making salsas and brought it to many family functions. He loved family, especially, his children and grandkids. He will be missed by anyone that knew him, especially his children, grandchildren and great grandchildren.

Dad was a member of the JC’s a service group that served the Community. Every year dad was responsible for building a float, planning events, and helping with the booths in the park for the 4th of July. We were very proud of his time he gave to his community. I think he loved serving because he had such a great example from his own father who was always willing to help others in the community and even served as a volunteer firefighter.

We could always depend on dad giving us a big hug and kiss and bringing a surprise home at the front door to us children after a business trip.

His children always believed and knew that dad loved them. They felt so blessed because he was their dad.

Dick was preceded in death by his wife, Reah and two of his daughters, Dana (George) Pence, and Stephanie (Dana) Moore, as well as his son in law, William Ralph Clyde, and Great Grandson, Noah Clyde.  He is survived by his sister, Racquel (Thad) Rowley Stewart, two daughters, Rozalynn Rowley Clyde (Vernon) Hughes, Shauna (Hal) Parks, and Son, Richard Stott Rowley…  as well as 24 grandchildren and 79 great grandchildren.