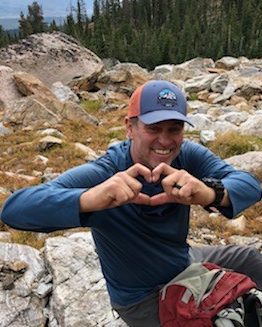 Jim was born on November 1st, 1965 in Sun Valley, Idaho to Butch and Penny Harper. Known as Jimmy, Jimbo, Harp or Harper, Jim was a passionate fly fisherman, hunter, guide, athlete, gardener, and chef. Jim was also an artist and spent his career as an art teacher at Riverstone International School.  He touched hundreds of kids with his calm manner encouraging them to follow their passion and be their best self.  Jim was positive and reassuring, steady and kind, and brought out the best in his students.

As with many things, Jim elevated storytelling to an art form.  Hearing him tell a story transported the listener to a river-trip campfire, a high country ridge, or an adventure with his family and dogs. He spent many years as a guide on the Middle Fork of the Salmon, and his skills learned there were passed on when leading so many outdoor experiences with family, students, and friends.  To this day he holds the distinction of being the only person to ever pelt an enraged moose in the rump with a frog to save a group of campers. Jim left an everlasting mark on those that were privileged to spend time with him and his presence will be sorely missed.

He is survived by his wife Jill, his 2 sons, Harrison and Henry, his mom and dad, Butch and Penny, his brother Patrick, niece and nephew Eloisa and Ben, his mother and father in law, Dale and Donna and his dogs, Belle and Stanley.