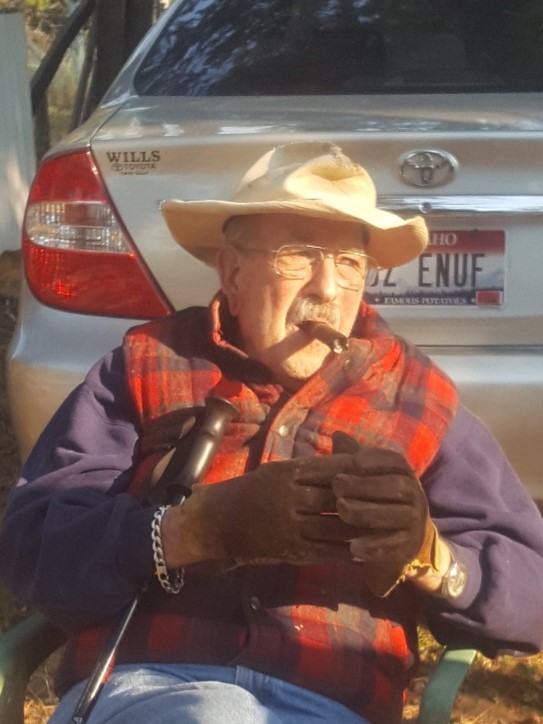 Jim passed peacefully at home from complications of heart failure surrounded by his loved ones. He was born in Laramie, Wyoming to John and Pearl (Hanna) Reed. He was raised in Nampa, along with his sisters, Marge and Colleen, graduating from Nampa High School in 1949.

In 1950 he joined the Air Force and was deployed to Korea. He was honorably discharged as Airman First Class in 1953. He was a proud veteran. Upon his return he enrolled at ISU and received his Associate Degree in diesel mechanics. Jim had a long and satisfying career at Idaho Power as a field diesel mechanic for 32 years. He retired in 1990.

He married Charlotte Barton in 1956. They raised three children. They were divorced in 1982.

Jim had many varied interests and hobbies involving his family, friends and his partner of more than 20 years, Roxanne Wasson. Over the years he established a special bond with Rozlynn, Roxanne’s daughter.  Jim was a 37 year member of the BAA and staunch supporter of Boise State Athletics. He was a referee of NCAA track and field events at BSU. He pursued many species of fish and game from Canada to Mexico with some of his ISU class mates and other longtime friends. He accumulated many trophies and photographs proudly displayed on the Walls of Fame in his Man Cave. He flew into many back country airstrips to help repair and maintain them. He entertained family and friends with card tricks. Jim was a mentor who passed his mechanical skills and hunting and fishing ethics down to his son, Scott. He was a good listener and confidant.

A lifelong lover of dogs, Jim acquired his first German Shorthaired Pointer, Max in the late 60’s. He discovered a knack for dog training and achieved several obedience trophies with Max. Max learned to sit on a stool and play piano, swing on a swing, slide down a slide and entertain the young students at Owyhee and Hillcrest Elementary Schools.

Jim was a loyal friend and worked at sustaining many friendships that lasted decades. He was forthright, loving and charming, and his sense of humor could light up a room.  In his later years he enjoyed BSU football and basketball games and camping and fishing excursions all over the Intermountain West with his best friend and fishing buddy, Roxanne. They enjoyed many good times on Cascade Lake and grilled trout at his place in Donnelly. The family is most grateful for the years of love and support of Jim by Roxanne especially during the last year of his illness.

Through grief how do you tell the story of a man who touched so many?  We remember the man, the myth and the legend and may your cup runneth over with good memories. We are thankful to Keystone Hospice for making him comfortable at home. Per his request there will be no service.  If you desire you may make a donation to the American Heart Association in his memory or crack a beer, grab a pole, wet a fly and remember Jim. He is always in our hearts.

Do Not Stand at My Grave and Weep

This poem is in the public domain.