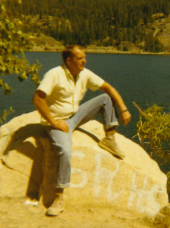 Jim was born on February 18, 1931 in New Meadows, Idaho to Glenn J. & Ethel M. Rhodes. James was one of eight children, a large family that was raised on the Salmon River. His Grandparents had a large wheat ranch where Jim spent his summers and shared many fond memories of his grandfather.

He met his one & only Love on New Years Eve at a dance in Melba, Idaho. He married Rosezela Skeen after that dance on March 18, 1950 & began a long & lasting marriage of 69 years.

Jim had a strong work ethic being raised during the depression & had many jobs of success. Jim worked on four different dams as an iron worker, was a truck driver for a time, a concrete expeditor, and then began his excavation business of many years in the Treasure Valley. Jim studied to become a pilot & owned his own plane for a time. He & Rose built a cabin in Garden Valley which he loved for 40 years. Him & Rose moved to Hawaii for five years & built a home there before returning home to Boise.

He is survived by his four children, James (Dale) Rhodes of Boise, Donna Brooks of Boise, Deanna Rhodes of Hawaii and Joseph Bruce Rhodes of Boise. Jim has eight grandchildren & 16 great grandchildren, some of which he developed a very close relationship in later years with their devotion to him with many years helping with up-keep & care on his home & at his cabin. Forever shared memories with grandpa at the fire pit roasting hot dogs and marshmallows.