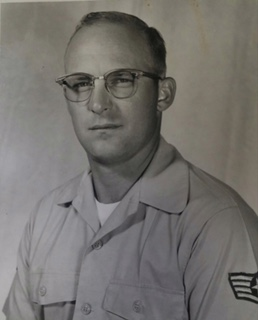 James Anderson Walker (Jim) passed away at home in Emmett, ID in the early morning hours of October 27, 2019.

He attended schools in Manhattan, NV, Stibnite and Emmett, ID.  Jim enlisted in the United States Air Force just days ahead of receiving his draft notice during the Korean Conflict. Jim made the Air Force his career and had many assignments abroad seeing much of the world.  Jim had a lot of good times while serving and made many friends.

In the fall of 1969, while home on leave from Elmendorf Air Force Base, AK he met a hometown girl, Bertha (Smith) Heathman.  He was smitten and returned on leave the following June.  They married and Jim quickly became “Dad” to her sons, Randy and Jeff and daughters, Nicki and Gwynna.

Once married, Jim was transferred to Patrick Air Force Base in Cocoa Beach, FL which supported the Eastern Test Range at Cape Canaveral.  Jim and family then made the long car trip to Florida in early 1971 with him stopping to show his new family every historic and interesting site along the way.

While living in Florida, Jim took the kids to the beach often, fished off piers, took them to watch local residents “shrimping” off draw bridges, visited orange groves, and many other adventures that are happy memories to them now. Jim also took the family on several trips including Castillo de San Marcos (St. Augustine Fort), two trips to Disney World in Orlando when it first opened and the launching of Apollo’s 15 and 16.

In June 1972 Jim was ordered to Ubon, Thailand during the last days of the Vietnam War. The family returned home to Emmett, ID since they were unable to accompany him.  He served a year in Thailand alone.  When he returned he was then stationed at Mather Air Force Base near Sacramento, CA and the family was with him again.  While in California Jim took the kids on even more adventures including gold panning in Placerville, CA.

In 1975 Jim retired as a Master Sergeant Avionics Technician, just short of 24 years of service.

Once retired from the military Jim and family returned to Emmett where he continued working.  First as a property appraiser with the Gem County Assessor’s Office, then as a driver for Rambow Logging and lastly as a driver for Emmett Valley Fruit.

He had an interest in geology and joined the Gem County Rock and Mineral Club.  He became a lifetime member, served one term as president and participated in many field trips.  He shared his love of rocks with everyone and enjoyed many rock hunting trips with his daughter Gwynna, grandchildren and many other family members and friends.

Jim was a trustworthy and loyal husband to Bertha for 49 years.  Bertha always felt Carole King’s lyrics in the hit song “You Needed Me” expressed her feelings for Jim.

As a dad, Jim was supportive, encouraging, shared knowledge and was always there to lend a helping hand which included numerous auto repairs (he was a great mechanic).

Jim was a super grandpa to his grandchildren.  He was always giving them rides to wherever they wanted to go.  Andrew’s (Drew) dad always said, “Grandpa and Drew made so many hamburger and milkshake runs that he thought they helped to make the down payment on the Emmett McDonald’s”.

The family would like to thank the dedicated employees of Horizon Hospice for their assistance and support through the years with a special thank you to Shelley Bright.

Arrangements are under the direction of Bowman Funeral Parlor, Garden City where an online guest book is available at www.bowmanfuneral.com

There will be a private family interment of his ashes at a later date.

In lieu of flowers the family suggests that memorials be made to the Alzheimer’s Association (ALZ.org).