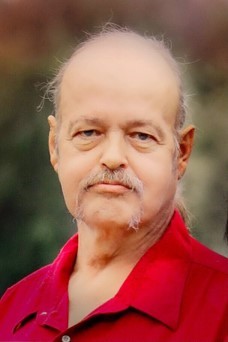 On December 11th, 2020, God chose a rose to be placed in his garden of angels.  James Howard Hendrix Jr. was born in St. Joseph, Missouri.  He resided there until the family moved to Meridian, Idaho in 1974, where he attended Meridian Junior High and High School.

After high school, he had a brief stint in the Army.  Upon returning back to Meridian, he married Sherry Jewell.  They moved to Anchorage, Alaska and went on to have three children.  They lived, for a time, in California, later to move back to Idaho to divorce.

Jim moved to Oklahoma City, where he worked in repossession.  That is where he received the tattoo he was proud of “DOES NOT PLAY WELL WITH OTHERS”.  His nickname was “Tornado”, which he received while driving his work truck during tornado season.

In 2011, he moved to Ontario, Oregon to be closer to his mother.   In 2014, he married Dana Goerrich, who had two young children at the time.  Jim taught the children how to fish, and every spare moment you could find them fishing.

Jim began to transport RV and travel trailers in 2015, traveling throughout the northwest and beyond. In the spring, Jim was diagnosed with Pancreatic Cancer, and received chemotherapy treatments. Even while on the treatments, he continued to work alongside his mother as much as he could.  After many complications, he decided to come off of the road to be with his family.  On December 11th, he passed away peacefully, surrounded by family and friends.

Jim is survived by his wife Dana Goerrich and stepchildren James and Daisy.  His mother Beverly Kline of Ontario, OR.  Two sisters Terry (Paul) Harrison of Ontario, OR. Rita (Steve) Pasha of Butte, MT. James Lee Hendrix of Savannah, MO.  Daughter Sherorra Jewell of Nampa, ID. Two sons; Don Hendrix in Michigan and Rick Hendrix in California. Two granddaughters and one grandson.  Along with uncles, nieces and nephews and cousins.