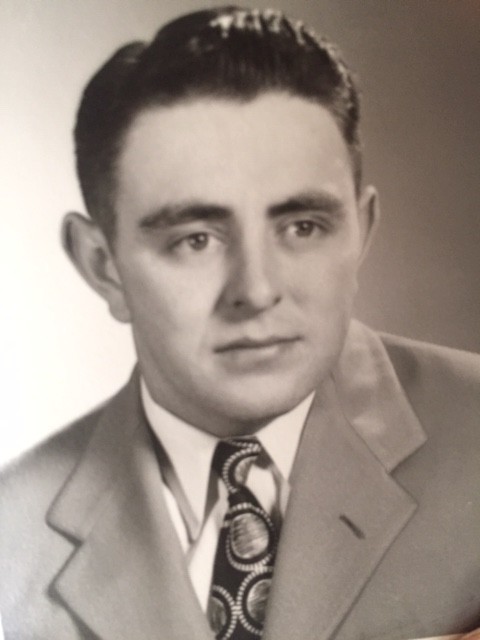 John Arthur “Jack” LeClaire passed away peacefully on Wednesday September 18, 2019 in the Boise, Idaho area where he had lived since November 2017. He was born to Seth Arthur LeClaire and Margaret Mary “Rita” (McNicholas) LeClaire in Anaconda, Montana on August 23,1927. In recent years, Jack spoke frequently of his hope of soon reuniting in heaven with his parents, his sister Mary (LeClaire) Deranleau, and his brother Laurence LeClaire.

Jack grew up in Anaconda in the years following the Great Depression.  His family was very important to him.  He enjoyed playing all sports with his younger brother and all their mutual friends.  As is the custom in Anaconda, everyone who grew up there had nicknames, some had even more than one! Jack always called his brother Laurence by the name of “Laur” and Laurence often referred to his brother as “Jackie.” Jack played both basketball and football in high school. Laurence was outstanding in football in High School, later starring for the University of Michigan football team. Watching his brother play and win in the Rose Bowl in 1951 was a terrific lifelong memory for Jack.

In 1946, Jack graduated from Anaconda High School and enlisted directly into the United States Navy.  Jack was first sent to San Diego for boot camp. Most of his service was in the South Pacific after WWII as a Fire Controlman Third Class on two ships: The USS Springfield and USS Moale.  Jack was honorably discharged following the short illness and death of his mother in 1948.

Upon returning from the service, Jack moved to Missoula to resume his education at the University of Montana.  His first objective was to become a high school math teacher and to coach football, basketball and track. Along the way, he played some football for the Grizzlies and eventually found his most important reason to be in college – he met JoAnn Whalen, a history major.  Jack and JoAnn had common friends who introduced them. They were married on August 29, 1951 in JoAnn’s hometown of Pompey’s Pillar, Montana (near Billings). Many of their high school and college friends came to their 50th Wedding Anniversary celebration in Moscow, Idaho.

Jack left his mark for 15 years teaching and coaching in Montana.  He was in Alberton from 1952 to 1957, Livingston from 1957 to 1962, and in Helena from 1962 to 1967. He had many treasured memories, but by far his favorite place was in Livingston.  He had excellent athletes in basketball and track to work with, and Jack and JoAnn were close to JoAnn’s sister Mickey (Whalen) Olson and Clayton Olson and their family.

Jack and JoAnn made a difficult decision after the five years in Helena. Their family had grown as Connie (1954), Terrie (1957, Tim (1959) and Tom (1963) had come along in relatively rapid fashion.  In 1967-68, they made the decision to leave coaching and teaching (and Montana), to begin managing and then owning a retail appliance store.  Jack’s sister Mary (LeClaire) Deranleau and her husband Jim, who had Deranleau’s Appliance of Lewiston, wanted them to run Deranleau’s Appliance of Moscow (Idaho).  Montana’s loss was Moscow, Idaho’s gain.

Jack hit the pavement in Moscow running. He took the opportunity to run a retail store and became very involved in the community, his church and raising a family of five, after the addition of Michael in 1968. Spanning almost 50 years, Jack was an Ambassador in the Chamber of Commerce, Exalted Ruler of the Elk’s Lodge, and president of the downtown Lion’s Club. He served the community that supported his business.  He was active in St. Mary’s Catholic church as well. He was in the Knights of Columbus and served on the church board in the years the Parish Center was planned and built.  In addition, Jack supported many local sports activities in the Moscow area!  He was a donor to both WSU and University of Idaho athletic departments.

Jack loved sports all his life. He was a fan of all his children’s and grandchildren’s teams.  Jack had a large baseball cap collection to prove this fact.

Once, a close business associate of Jack’s informed many of Jack’s family members that “someday, Jack LeClaire would be one of the fastest entrants into heaven!”   The family does believe that is what happened on the afternoon of Wednesday, September 18th, 2019.

Services will be held to honor Jack in Livingston, Montana at St. Mary’s Catholic Church on Saturday September 28th at 10 AM. Graveside services and a reception will follow afterward.

On Saturday October 5th, a funeral mass will be held at St. Mary’s Catholic Church in Moscow, Idaho at 11 AM, with a reception to follow at LaQuinta.

Arrangements are under the direction of Bowman Funeral Parlor of Garden City, Idaho. www.bowmanfuneral.com 208-853-3131.  In lieu of flowers please make donation to Wounded Warrior Project.