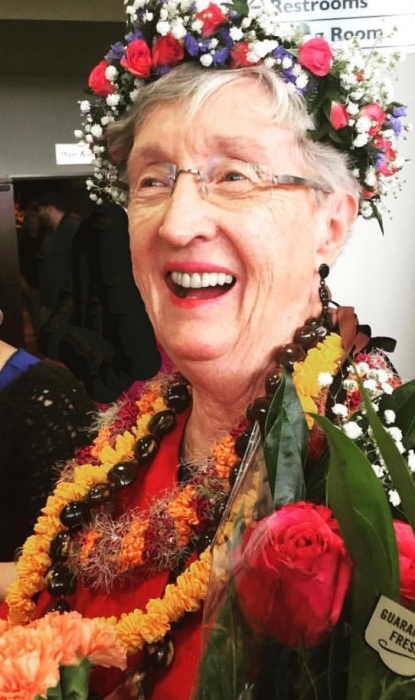 Helen Page Falsani, 86, passed on to her eternal reward at her home in Boise’s North End on Aug. 8, after a miraculously lengthy battle with cancer.

Mrs. Falsani, a native of Connecticut, had lived in Idaho for six years, quickly immersing herself in the spiritual and social life of her adopted hometown. She was an active member of Life Church in Meridian, where she proudly graduated from its Bible College in 2016 (when she was 83 years young), and most recently had become a part of the River Church community where she loved being around (and befriending many of) its younger worshipers. Mrs. Falsani, who was an elementary school teacher for many years in Connecticut and was a civilian educator for the Air Force in Libya, Japan, and Germany in the late 1950s and early 1960s, taught Bible studies for friends and neighbors at the Mallard Pointe community in Garden City where she lived until earlier this year, and had plans to begin leading a new Bible study on the Book of Daniel just days before her death. Mrs. Falsani was an alumna of Southern Connecticut State College and held a master’s degree in education from Fairfield University in Connecticut. She loved sharing her Christian faith and love for Jesus Christ with everyone she met, whether neighbors (old and new), seatmates on a long (or short) plane ride, fellow diners at Harry’s Bar (where she was a longtime regular on Monday’s “family night”), water aerobics classmates, the ladies at the gym, or her magnificent doctors, nurses, and caregivers at St. Luke’s Hospital and hospice.

Mrs. Falsani was preceded in death in 2012 by her beloved husband of nearly 60 years, Mario “Muzzy” Falsani, and is survived by a son, USAF Lt. Col. Mark D. Falsani of Boise; a daughter and son-in law, Cathleen Falsani-Possley and Maurice Possley of Laguna Beach, Calif., a grandson, Vasco Fitzmaurice Mark David Possley of Laguna Beach, Calif.; and many nieces, nephews, grand-nieces and grand-nephews.

Arrangements locally are under the direction of Bowman Funeral Parlor, Garden City. A wake was held privately at her home in Boise earlier this month, and a memorial celebration of her life is planned for later this fall in her native Connecticut.

In lieu of flowers, the family asks that donations be made in Mrs. Falsani’s name to her favorite local charity, the Land Trust of the Treasure Valley, https://www.lttv.org/donate.