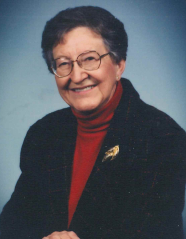 Helen Louise (Justice)Tally died October 30, 2021 at Lenity Assisted Living with her son Mark at her bedside.

Helen was born on April 15, 1923 at Beech Creek, Oregon; she was the first born child of her ranching parents, Max and Effie (Carson) Justice. The family grew with the addition of sister, Betty Maud, and brothers, Edwin and Ray. Helen had a happy childhood, surrounded by her loving parents and siblings, grandparents, aunts, uncles and cousins. She spent many hours riding her horse and roaming the wide-open spaces, the surrounding orchards, pastures, creeks and hills. She had a lifelong love of the outdoors, especially the mountains; her husband called her, “My mountain girl!”

Helen attended grades 1-8 in a one-room school house in Fox Valley and graduated high school at Long Creek. Because there was no school bus, her dad bought a car and hired a neighbor-friend to drive her, her cousin and two neighbor boys, eleven miles, over the mountain to school for four years.

After high school, Helen moved to Portland and worked at the Albertina Kerr Nursery for the children of unwed mothers. It was here in Portland that she made “the most important decision” of her life – she gave her life to Jesus Christ.

As WW II was ramping up, she moved back to eastern Oregon and worked for the Knox Co., a mercantile in John Day. In the summer of 1947, Helen had just completed her first year of college at Eastern Oregon and was manning the Long Creek Forest Service lookout. Her mother made arrangements for her to go a blind date with “Tally, an interesting, young gentleman.” He had been a paratrooper in the Army and after discharge, looking for adventure, headed west from Iowa. He landed in Oregon, working for a logging company. By January of 1948, they were engaged and Helen left school to marry Elbert Tally on April 14, 1948.  They moved to Fresno, California where their first son, Chad, was born in 1949. In October of 1950, Helen and Elbert moved to Idaho, after being awarded a veterans homestead – 120 acres of sagebrush at the north end of Middleton Rd.  It was here that Helen would live for the next 40 years. Their second son, Lynn, was born in Idaho, in 1951, and their third son, Mark, in 1955. Sadly, Lynn died in 1964, following heart surgery. In the mid-1960’s, Helen returned to school and graduated from NNC with an education degree. She taught 3rd and 4th grades for the next 18 years in Middleton and was a well-liked, favorite teacher of many students. After retirement, she and Elbert enjoyed traveling but that time was brief as Elbert died suddenly in 1988. Helen remained active with daily walks, water aerobics, oil painting, bird watching, researching and writing family history. She also continued to travel with friends and loved spending time with her granddaughters. She was active in her church, Canyon Hill Nazarene for nearly 60 years, teaching and serving in multiple roles; the love of the Lord was a source of great comfort and strength to her.

The family wishes to extend thanks to Helen’s neighbor, Ute Garoutte; her daily visits assisted Helen to live independently in her own home until the age of 96.  We are also grateful to the staff at Lenity Assisted Living and Doctor’s Hospice for their care in the last months of Helen’s life.

A graveside service will be held on Monday, at 1 pm at the Middleton Cemetery; a memorial service will follow at 2:30 pm at Canyon Hill Church of the Nazarene.