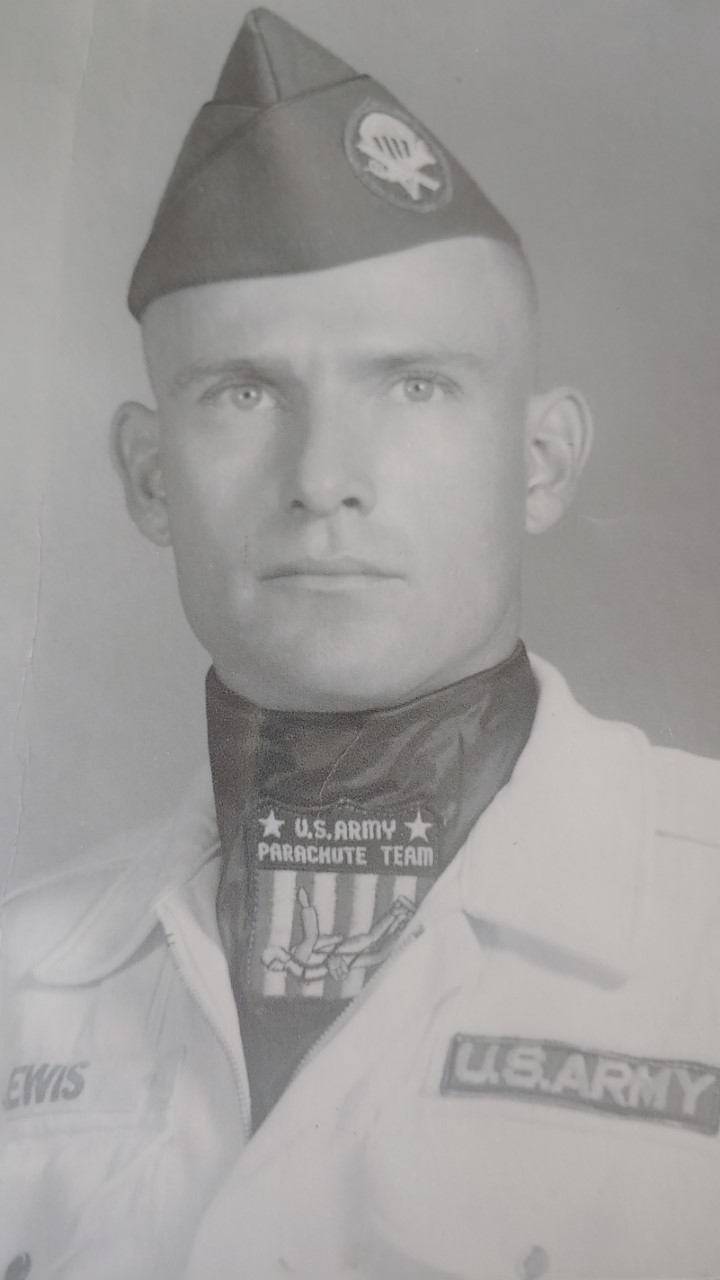 Harold Ray Lewis, 88 died peacefully in his home on February 26, 2020. Harold was born in Notus, Idaho to Pearl and Ray Lewis. Harold began his working career at 15 when he began selling magazine subscriptions for Union Circulation Company, Inc. He ended up in Dayton, Ohio with no money and no place to stay. He lied about his age and got a job driving a taxi cab. It wasn’t long before they found out he was only 15 and he was on his way back to Notus. What he really wanted to do was join the Army, so in 1953 he enlisted. In 1954 after obtaining the rank of sergeant at Ford Ord, CA, he was assigned to Korea where he served as a squad leader and later as a platoon sergeant in the 17th Infantry Regiment. He returned to the United States in 1955 and served as a platoon sergeant in the 1st Infantry Division. Early in 1956 he was reassigned to Fort Campbell, Kentucky and the 508th Airborne Regimental Combat Team. He was later assigned duty as a platoon sergeant with the 101st Airborne Division. He was a member of the Army Parachute team whose mission was to promote nationwide interest in Army Sky diving. He remained with the 101st Airborne Division until 1963 when he transferred to Fort Bragg, North Carolina with the mission of assisting in the development of the concept and organization of the United States Army Parachute Team; the Golden Knights. As a charter member he competed internationally as well as in air shows, state fairs and Armed Forces projects. He also performed a sky diving segment for the popular TV show “Sports Spectacular”. In 1961 he was reassigned to Venezuela where he assisted the Venezuelan Air Force in the organization and training of their Parachute Team. In 1964 he served his first of two tours to Vietnam. During his service he was awarded three Bronze Stars for Valor, Heroism and Meritorious Achievement in Ground operations against hostel forces. He also received his CIB (Combat Infantryman Badge) in Vietnam and the Expeditionary Medal personally from General Westmoreland. In 1965 he returned to Fort Bragg where he was assigned to Special Forces. His first assignment was as a Senior Instructor for the HALO (High Altitude/Low Opening) Parachutist Course. He remained with Special Forces through many varied worldwide assignments. His last assignment was a senior advisor to the National Guard in Ft. Richardson, Alaska. There he obtained his pilots license and ran a parachute jump school.
Harold retired from the Army in 1973. He then began crop dusting, flying a Thrush Commander for many years in central Washington and eventually ended up driving long haul for England Trucking.
In 1948 Harold married Betty Rogalsky. They had three children, Gayla, Anita and Bryan. Harold enjoyed playing pool and pinochle. He was fluent in Spanish, and enjoyed traveling, especially to South America. Both he and Betty had a love for cats. They willingly took in all strays; had them spayed or neutered and even built a cat hotel outside for them all to sleep in. Except for the favorites that found their forever home in the house.
He is survived by his daughters, Gayla Javaux, Anita Hansen (Erik), his son, Bryan Lewis; his six grandchildren, Trina, Kristin, Lisa, Dirk, Aubrey, Mya, five great grandchildren, Charlie, Shelby, Jude, Rawley, and Avery, a brother Earl Lewis, a sister, Marilyn Kreiman and three nieces. He was preceded in death by his wife, Betty and son-in-law Mike Javaux.
The service will be officiated by Chaplain (Col) Vahan Sipantzi, in the Lower Boise Cemetery, Parma, Idaho, March 10, 2020 2:00 p.m.