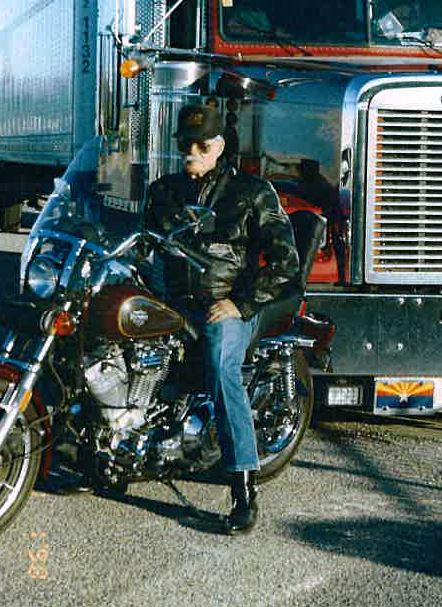 On March 9th, 2022 the world lost one of the coolest Uncles, Brothers, Dad, Great Grandpa and Husband to ever walk this earth, Grover Cleveland Pounds AKA Uncle Groovy drove his 18-wheeler to heaven joining his Parents, his 3 Brothers, his daughter, his step children and Brother-in-laws.

Grover Cleveland Pounds was born July 2, 1928 in San Diego, California to Hattie Beatrice Pounds and Clarence Henry Pounds.  He was the 5th of 7 children.

Grover drove an 18-wheeler for 65 years, served in the US Navy from November 1946 to January 1950.  He was 93 years old at the time of his death.  One of Uncle Groovy’s favorite past times was riding his Harley with his nephews Mark and Mitch Briggs.  Many hours were spend riding the highways and byways of Idaho, Living the good life.  In 2019 they were able to take a trip of a lifetime.  Meeting up in Ohio then riding through the bottom of Ohio through Kentucky and on the famous “Tail of the Dragon”, 318 corners in 12 miles.  Uncle Groovy and times like these will be missed forever, but will live on in our hearts and memories.

We would like to thank Keystone Hospice (Michael Shane Briggs) for the great care he received and the wonderful nurses and aids at the VA Veterans Hospice, you were all so wonderful to Grover and us.

There will be a committal service with military honors at the Idaho State Veterans Cemetery March 22, 2022 at 1pm.