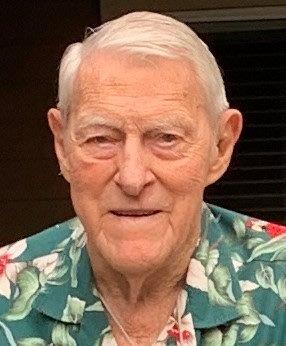 Glenn Michael Compton was born to Michael and Mariane Compton on September 3, 1930 in Boise Idaho.  Glenn peacefully passed away after a long battle with congestive heart issues on August 13, 2021; he was 90 years old.  Glenn was preceded in death by his parents Michael and Mariane Compton, his loving wife Marge Compton and his brother Jim Compton.  He will be greatly missed.

Glenn graduated from Boise High School in 1948 and completed two years at Boise Junior College (BJC).  In addition to college studies Glenn took flying lesson and attained his private pilot license on June 30, 1949.  Then in 1951, Glenn enlisted in the United States Navy to become a Naval Aviator flying the P2V-5 (Neptune), maritime patrol and anti-submarine warfare aircraft.  Glenn was assigned to Patrol Squadron One at Naval Air Station Whidbey Island, Washington.  His military career took him around the world while spending many hours patrolling contested seas around Korea and the globe.

While on Christmas leave from the Navy in December of 1953 Glenn participated in the annual collegiate ski race for former racers.  To his chagrin, he fell going through the second to last gate and fractured his right leg.  While lying flat on his back, leg propped up, he proposed to his sweetheart Marge affectionately called “Sweet Pea”.  They were married February 13, 1954 at Whidbey NAS with Glenn’s leg still in a cast.  Glenn separated from the Navy in 1955 and joined his father in the family business, Compton Transfer and Storage Company founded by Glenn’s Grandfather in 1902.  Glenn worked in all aspects of the Transfer business helping to transform the local drayage and moving company into a national/international operation affiliated with Mayflower Worldwide Moving while preserving the heritage symbiotic relationship with the Union Pacific Railroad.

Glenn was active in many aspects of his life from business to recreation.  Glenn was past president of Idaho Movers and Warehouseman’s Association.  He was a member of Idaho Motor Transport Association, held position with board of directors of Mayflower Warehouseman’s Association, National Furniture Warehouseman’s Association, Idaho Employers Council and Treasure Valley Traffic Club.  Glenn was active with the Boise Chamber of Commerce and held a position on the group’s board of directors.  He actively engaged with the Idaho Legislature promoting transportation issues in the State of Idaho.  His community service involved the Boise Junior Chamber of Commerce (Jaycees) becoming president in 1959.  Because of his community involvement and these great organizations, today we enjoy the cross on Table Rock, signage on Lucky Peak Dam “Keep Your Forests Green.”  Glenn believed in giving back to the community and was an avid supporter of Boise State University, Boise State Athletic Association and Bogus Basin Recreation Association.

Throughout his life Glenn was an active snow skier.  Well into his golden years he was gracefully carving the groomers, hitting the powder and enjoying his free “senior” ski pass.  Glenn loved water skiing and golf, especially in McCall.  He was an active hunter and loved to fish Idaho rivers and streams eventually establishing a family outback at Magic Reservoir.  He studied and trained to become a second-degree black belt in Judo becoming senior Sensei and greatly enhancing the Capitol Judo Club.  He never lost his love for aviation and flying.  At different phases of life, he owned a variety of aircraft, maintained his private pilot license, and spent many hours flying the family on fun adventures and exciting destinations.

As the “Big Daddy” he was an amazing father, grandpa, uncle, cousin who enjoyed family gatherings, roughhousing and playing around.  He enjoyed playing the guitar, singing, and dancing.  He took great pride and had much fun teaching his children, grandchildren, and many acquaintances how to ski, golf, hunt, fish, even “cliff dive” and basically, how to laugh and play.  His performance and leading the family through a “Lion Hunt” will always be a treasure; he lived life to the fullest.  Loved family, loved life; he thought the value of a person was not measured by their compensation but their contribution.

The family would like to offer special thanks to Holli and Jeff Vanderwall, Keeley Keating and Kathy Lally who provided loving care and medical attention to Glenn over the past several months. Thank you to Tyler and Sam with Heart and Home Hospice. Living in Boise for almost 91 years, there are so many friends and families that were an important part of his life that we simply cannot list you all but please know Glenn and his family thank you.

In lieu of flowers please make a charitable donation to your favorite charity in Glenn’s honor.