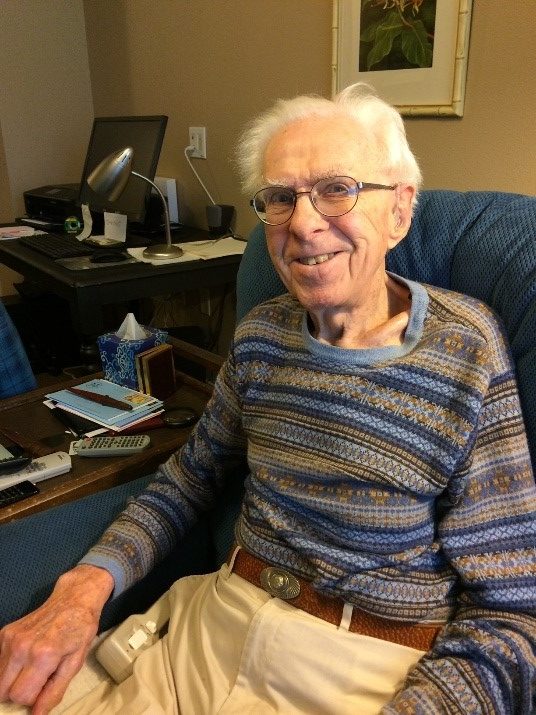 Glen Herman Holzhausen was born on a farm outside Chesaning, Michigan on April 20, 1923. In the morning of May 8, 2020, he passed away at Paramount Parks Assisted Living in Eagle, Idaho where he lived for the past four years. He was aged 97 years and 18 days. Glen was the second child and eldest son of Philip and Eva Holzhausen, and grandson of Herman and Juliana Holzhausen who immigrated to Michigan from Germany. Glen chose not to stay on the farm but to attend college at General Motors Institute (now Kettering University) in Flint, Michigan and become a mechanical engineer. During his time at GMI he was drafted into the Army. Following basic training he was stationed in the Panama Canal Zone. He met his first wife, the accomplished singer Mary Katherine Litz, at a USO show in Baltimore, Maryland in 1944. They were married on August 24, 1946.
Glen completed his engineering degree at GMI in 1948 and worked several jobs as a mechanical engineer focused primarily on the design of internal combustion engines. The majority of his working career was spent at Garrett AiResearch in Southern California where he played an active role in bringing turbocharging technology to large diesel engines. During his last ten years at Garrett he was in charge of coordinating the engineering activities of their overseas divisions. He had always enjoyed traveling and this established a passion that he continued the rest of his life. He made many close friends around the world including Europe, Asia and South America. In 1982 he retired from Garrett and he and Kathie moved to Fallbrook, California. Kathie was active in the community and Glen managed his 10-acre avocado ranch.
Kathie died in 1993 and Glen married Sara Ewald in 2000. Glen focused his efforts on maintaining his 2-acre homesite in Fallbrook and filling it with all kinds of fruit trees. There was seldom a morning when fresh, homegrown fruit from his trees wasn’t included in the morning meal. After Sara died in 2016, Glen moved to Eagle, Idaho to be closer to his daughter Lisa and her family. Preceding Glen in death were his wife Kathie (1993), wife Sara (2016), brothers Phil, Wayne, Richard, and sister Barbara. Surviving Glen are his children Gary (wife Leslie), Dale (wife Patti) and Lisa (husband John) and seven grandchildren (Alex, April, George, Kim, Erika, Will, and Beck) and sisters Doris (husband Doyle), Marjorie, Marylyn, and many nephews and nieces. Glen always spoke fondly of his years growing up on the farm in Michigan and never forgot his deep ties to the farm and family. Celebration of life arrangements are pending. As a remembrance of Glen’s life, contributions can be made to Disabled American Veterans or Save the Children charities.