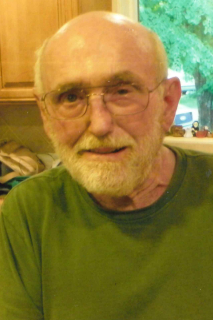 “He was a good man”, would be the simple epitaph for his life. That goodness manifested itself in a hundred different ways that left a lasting imprint on the lives of those who loved him and knew him as a friend.

George was born October 3, 1936 in Gooding, Idaho to Frank L. and Edith C. (Prince) Varin, joining sister Joanne on their farm north of Gooding and into a large family of aunts, uncles and cousins, and a community, that continued to be a strong bond his entire life.

His friendships from growing up in a small town, with the same classmates, first grade through high school, made for some wild adventures (all, not entirely legal) and some great stories they would retell at every class reunion.

Starting Washington State College in 1954 brought more lasting friendships and wilder adventures (most, definitely not legal). Summers during college years were spent wheat farming in the Palouse hills on the Huntly farm or laying natural gas pipelines along the Columbia River. Being the youngest crewmember was an education in itself and helped
develop his poker skills and added to his repertoire of great stories. After finally applying himself to studies and extra-curricular activities (including collegiate bull riding) he graduated from, what is now, WSU in 1959.

Shortly after graduation he went to work for South West Health Department in Canyon County working in Caldwell and Nampa. Later he lived and worked in Burley as an inspector for Safeco Insurance Company and then lived in Mountain Home and worked as a health inspector in Elmore County. Making life long friends in both places. In the early 1970’s he began his career in Boise with the Sate of Idaho Division of Environmental Quality (after the department’s many name changes). Not one for office work, he was able to go out inspecting feedlots, municipal and private water supplies. As with everywhere he went, he met and developed more lasting friendships. By the time he’d put in twenty years as a state employee, he was ready for new adventures and retired in
1994.

In 1976, while working in the old Armory Building he met Susan Baxter Haney, another state employee and developed a literal, “passing” friendship; he walked by her office door numerous times a day. Over time (which revealed they were both in Nampa at the same time, although, Susan was only in junior high and they had attended the same wedding in May of 1964 but never met) the shared conversations and laughter evolved into occasional lunches, then dinners and fishing outings. Once the outings started to include her two young sons, Mike and Matt, it all just fell into place and they were married April 1, 1978. In August 1981, what he thought would never happen, happened and his beloved daughter, Lesley, was born. So, as a confirmed bachelor after all that time, within a little over three years he was married and Dad to three children, embarking on yet another adventure. This time maybe not as wild, (but at least legal) and still made for some great stories and memories.

While growing up in Gooding there were always adventures to be made and when George was with his cousin and best friend, Jim Varin, they covered lots of territory. One thing they did together was start skiing in Fairfield at Soldier Mountain when all it had was a tow rope. Over the years, they both developed into accomplished skiers and certified ski instructors. After Jim left Soldier Mountain ski school to work as an instructor at Sun Valley, George ran the ski school for a number of years. He and his instructors taught hundreds of area adults and kids to ski and enjoy the sport. Riding up in the ski lift, you could spot George from his beautiful smooth turns down the hill. He skied at a number of resorts in the west into his 70’s. Fly fishing was another favorite sport (actually, any kind of fishing) and he made a number of fly rods and tied the majority of his own flies. He thought it was a sport best enjoyed with family or friends and would be up for a trip at the words “crappie”, “bass” or “go”. Needless to say, there were always good fish stories at the end of the day. In 1983 he began sailing his Catalina 22 and was soon sailing in regattas with experienced sailors from the local sailing club. He was also able to go to some national competitions and take some relaxing sailing vacations in the northwest. As always, there were more new friendships, more adventures, more great stories and more than a few 1st place finishes with his crew of Mike, Matt, Lesley or various friends. It was while working for the state he became a member of the “Literary Society” a group of colleagues and friends, that may have, rarely, discussed a book but met once a month for almost fifty years to play poker and solve world problems. A few of his proudest accolades were: frequently winning the competition with his long-time friend, Jim Runsvold, for having the first tomato by the 4th of July; his 3rd place finish in the home-made salsa competition one year at the Western Idaho State Fair; climbing Mt. Borah. (Coaxing Susan along with, “Trust me, it’s just a little day hike.”)

It’s no coincidence the word “friend” appears throughout the description of his life. He had the ability to make you think he’d been waiting to meet someone like you to share a few laughs and beers with. He was honest, dependable and accepting of people. He treated everyone like a friend and it was your choice to respond accordingly. He will be missed! But then, we do have all those great stories . . .

George was preceded in death by his parents Frank and Edith, numerous aunts, uncles, cousins and friends that were dear to him. He is survived by his sister, Joanne Ireton, of Twin Falls, and her family. He is, also, survived by his “sons” Michael Haney and Matthew Haney (Christina), his daughter, Lesley Maree Varin, his five Haney grandsons, Aidan, Oscar, Henry, Ryan and Liam, and his wife, Susan, who is forever grateful for the adventures, laughter and love shared with a “good man”.

There will be a party scheduled at a later date to celebrate all the friends and family who made George so glad he was part of this Great Adventure.