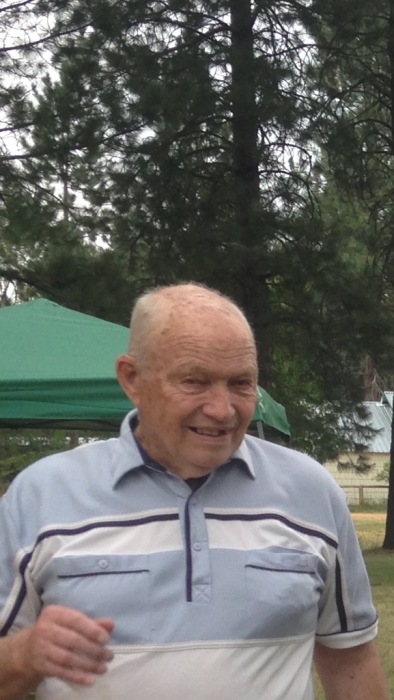 Gene Glen Gumm was born to Harvey Glen Gumm and May Humphreys Gumm on 1/21/37 in Lake View, OR joining his sister Donna and brothers Dale and Alan. Next came brother Arnie, sisters Joy, Wilma and Peggy as well as still-born brother, Harvey. Although Gene experienced the usual challenges in life his was a generous & compassionate nature expressed in many ways to his contemporaries, children & animals.

He was extremely proud of the years he served his country in the Navy Sea Bees, becoming, while there, not only a boxer-never losing a bout, a heavy equipment operator & certified heavy equipment mechanic, an actor in amateur theater. But always, in & out of the Navy, he worked at being a creator of Holy Moments for those around him. After an honorable discharge from the Navy, Gene worked in the logging industry where he continued to operate heavy equipment building logging roads. During that time he was stung by a yellow jacket and nearly lost his life. He was advised by the attending physician to seek other employment because he would probably not tolerate another such occurrence. Yellow jackets are an occupational hazard in that environment so he took the advice & did not go back to the woods. Instead he became an expert mason and concrete finisher. From his mid-40s to his mid-60s Gene sang in his church choir, re-establishing his teen involvement with singing in church. When he “retired” he went to work as a campground host, traveling the-Western United States in his motor home along with his sister and brother-in­ law Joy and Jack Larson. Gene & Jack were childhood friends.

Like his father before him, Gene’s family was always his main focus in life, only his love of God coming first. When Gene finished what his nephew calls our earthly “field trip” and returned home to heaven, he left behind, in addition to his siblings, children & grandchildren, a huge extended family of cousins, nieces and nephews four generations deep. He never missed one of the large annual family reunions attended by up to 100 of these family members. He considered as high lights of his live any visits with members of his family. He will always be remembered by his granddaughters Teaya Diane & Hallie Joe as “Papa”.

Even though Gene’s struggles with dementia were apparent to those very close to him in his late 60s, his final challenges with dementia finally overwhelmed him shortly after his 82nd birthday. He and his family were blessed that his closing battle with Alzheimer’s lasted less than a year. During his last couple weeks, he had a beautiful visit with his three surviving sisters Donna Shenk, Adrian, OR, Joy Larson; Emmett, ID and Wilma Eck, Centerville, ID as well as his brother-in-law, Jack Larson, Emmett, ID; a final visit from his daughter Cherylan Rae Gumm, his son Gene Glen  Gumm, Jr. and Michael Joseph Hardin, who has always felt like a son-by-adoption-of-the-heart, all of whom survive him; received the final Rites & blessings of his church. Gene was ready when his Lord took him home on Thursday night, 4/25/19.