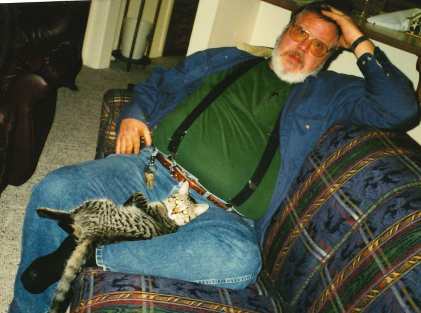 Fred F. Trescott, age 71, passed away peacefully on Friday, October 23, 2020, in his home. He was born September 30, 1949, to Eugene and Freda “Bea” (Rommel) Trescott or Pomeroy, Washington. He was a 1967 graduate of Pomeroy High School. He married Penny L. Adams (Trescott) on December 4, 1982, in Boise, Idaho. He worked as an automotive parts counter in Clarkston, Washington until moving to Boise, Idaho to teach auto parts at Boise State University in 1981. He later went on to retire from Idaho Transportation Department in 2007. Fred lived life to the fullest by enjoying the little things such as H.A.M. Radio, internet and Youtube, old western movies, reading and being a grandpa. He took a special interest in his grandkids and pets. Fred was able to make peace with God before he passed away. He is survived by his wife, Penny; son, self-adopted sons, daughters-in-law’s, and grandchildren. Fred was preceded in death by his grandparents, parents, a brother, uncle and his beloved kitty “Tiger.” Fred will be remembered as the amazing grandfather, husband and father he was. He will also be remembered for his jokes he told over and over and for being an “old poop” as his wife once said. As per Fred’s request, there will be no service held.