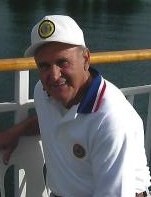 Frank E Richardson passed away June 27th, 2019 surrounded by his wife Darlene Q Richardson of 58 years and family. Frank battled cancer since 2008 only to finally succumb to its devastating effects. Frank was born in a small town in Georgia in 1936, the son of Charlie and Leila Mae Richardson. He was the 2nd son of eight brothers and two sisters. He enlisted into the Georgia Army National Guard in 1952 and served until 1954 at which time he enlisted into the Airforce from 1954 until 1961. He proudly served in the Airforce as Air Policemen at Fuchu Air Station Honshu Japan (1954 – 1956) then Mountain Home Air Force Base (1956-1961). At Mountain Home Air Force base he meet the love of his life Darlene Quinn and his love of the beauty of Idaho. Frank and Darlene married in a small church on a hot summer day in the small town of Rockland, Idaho in 1961. Having left the Air Force he started a career at the Old Idaho State Penitentiary, he became one of the best private tour guides at the Old Idaho State Penitentiary with his stories of his time there. In 1962 Frank and Darlene welcomed their first son, Scott. When his mother became sick in Georgia, they packed up and moved to Decatur Georgia to be close to family. This time afforded him the opportunity to join the Atlanta Police Department (1962 – 1964) and go through the Police Academy. While in Georgia, Frank and Darlene welcomed their second son, Frank. But the beauty of Idaho called them back, having secured a job at the Ada County Sheriff Office (1964-1965) Boise Police Department (1965-1990). Frank and Darlene welcome their first and only daughter Dawndra in 1967. With his career path set before him as service to the public he began to constantly improve himself to better serve the people of Boise. He started night school at Boise State College to receive an Associate’s Degree. Schooling at Keeler Polygraph School Chicago for polygraph (1969) United States Secret Service Treasury Department for Questioned Documents (1971). He would jump at any opportunity to continue his education. Retiring from the Boise Police Department in 1990, he began a new career of head babysitter for his grandchildren, some of the fondest memories that his grandchildren have is spending time with him fishing, camping, or just tinkering away on whatever may need fixing. He could never leave serving the people of Idaho from working Fire Support for NIFC (1996- 1999). Always looking to serve the public he found a new mission for the Veterans of the State of Idaho. From working to get land donated for the Veterans Cemetery, working on getting the State to allocate money for the Veteran’s Home and Cemetery, this was noticed by then Governor Dirk Kempthorne who appointed him to the Idaho State Veterans Commissioner (2000-2008) unfortunately health issues made it so he could not continue as Commissioner. He never stopped fighting for the Veterans of Idaho from working at the American Legion or helping at the Veteran’s home. His Motto was “the difficult I do immediately, the impossible takes me a little longer” which he proved everyday as he would never say can’t.

He is survived by his wife Darlene Richardson, his sons Scott Richardson (Debbie) and Frank Richardson (Karen) and his daughter Dawndra Aucutt, 8 grandchildren, 13 Great Grandchildren, multiple nieces and nephews.