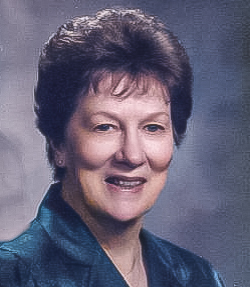 She was born in Gooding, Idaho in 1923 to Earl Henry and Flora Frances (Burrows) Finney. Her father worked for the Union Pacific Railroad and her mother owned a cigar and candy store. She attended school in Gooding, graduating in 1940. She was well liked; she was friendly and kind and always open to a good time, including weekend ski trips to Soldier Mountain.

After graduation, she moved to Boise where she enrolled in the St. Alphonsus School of Nursing. There she met Betty Stadler and Marjorie Strader who became her best friends for life. They raised their children together, traveled together, laughed together, and cried together.

Aletha, with her red hair and twinkling hazel eyes, had many suiters, but the one who stole her heart was Robert Hill. A Gooding boy, he doggedly pursued her until she agreed to marry him. They were wed in 1943 and spent 65 loving years together before Robert’s passing in 2008.

Robert was in the army, and shortly after their marriage, he was transferred to South Carolina. Aletha left nursing school to go with him, and they were there in 1945 when son Bill was born. Shortly after, they returned to Boise where daughter Barbara and son Bob joined the family.

Aletha was a stay-at-home mom. She was a casserole queen and dinners were an important part of family life. She was fun loving and allowed her children a carefree childhood. She was also one of the founding members of the Rabbit Club, a group of nurses who gathered their kids together to have parties and potlucks. When the children were grown and gone, the nurses continued to meet regularly for lunch. Aletha was the last remaining member of the group.

Once her children were in school, Aletha returned to the workforce. She served as an RN for a short time and then as a sales clerk for Falk’s Department store. She also volunteered at the VA.

When Robert retired, the couple traveled extensively, pulling their travel trailer across the United States. They also went on cruises where Aletha loved dressing up being involved in the entertainment that was part of cruise life. Summers would find Aletha and Robert in their trailer in McCall at Lakeview Village, their second home. They visited with old friends and made new ones. They enjoyed hosting their grandchildren, taking them swimming, fishing on the lake, and letting them eat all the pizza they could handle.

Aletha was quick to laugh, even at Robert’s bad jokes. For holidays, she loved gathering with friends and family and set a beautiful table, where candles were required. She also enjoyed evenings out at the Morrison Center and dinners at Red Lobster or the Cottonwood Grill. And every night before dinner, even to the last days of her life, she appreciated a full glass of chardonnay.

Aletha’s family includes her children Bill (Jo) Hill, Barbara (Ken) Folwell, and Bob (Kathy) Hill; her grandchildren, Pat and Tim (Marty) Folwell and Brad and Bryan (Michelle) Hill; and her great-grandchildren, Riley, Taylor, Cole, Ben, Max, and Thunder Folwell, and Hailey, Mya, and Sydnee Hill. She was preceded in death by her parents, her brother Bill, a daughter-in-law Sandy Hill, and a great-granddaughter Taylor Folwell.

The family wishes to thank Horizon Hospice and Red Fox Home Care for their services. A special thanks goes to Christy Shutz, a friend and caregiver, whose compassion and kindness helped Aletha and her family through the past year.

A private family gathering to honor Aletha will be held at a later date.

A private family gathering to honor Aletha will be held at a later date.