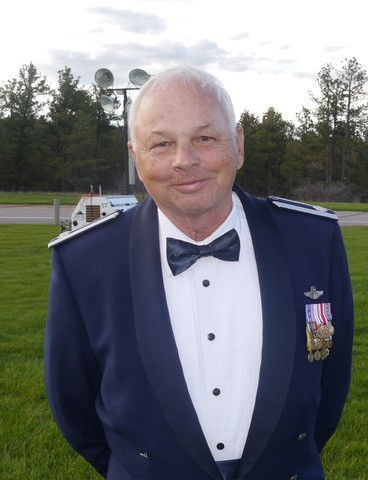 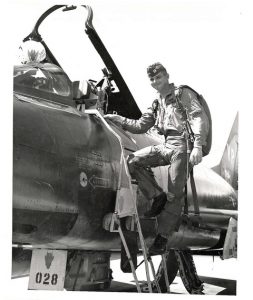 Ferdinand (Jack) Funke, 78, of Boise, ID and Patriarch of his clan passed away
peacefully on Sunday, February 11, 2018, after a courageous battle with pancreatic
cancer. Jack said, “If this obituary has been published, then I have slipped the surly
bonds and flown West.” Jack was born October 29, 1939, in Evansville, IN to Carl and
Laura Ruth (Drake) Funke. Despite memories of WWII food and fuel rationing, Jack had
a very happy childhood including memories of winning the Evansville Soap Box Derby
and getting his Private Pilot License at age 17. His love of flying would color his entire
life. Jack was raised Catholic and attended Sacred Heart School and Mater Dei High
School in Evansville, IN.

After a year at Evansville College and feeling a responsibility to his parents, Jack
applied and was accepted into the United States Air Force Aviation Cadet Program for
Navigator Training. In 1960, on his 21st birthday and five days after completing
Navigator Training School at Harlingen AFB, TX, Jack married his high school
sweetheart and love of his life Judy Schmitt of Evansville, IN.

Jack’s first assignment was the 445th Fighter Interceptor Squadron F-101B at
Wurtsmith AFB, MI where he and Judy spent 4 years and began their family with the
births of Renee, Elizabeth, and Bret. The turmoil of flying activity during the Cuban
Missile Crisis was memorable. Jack was reassigned to the 444th Fighter Interceptor
Squadron F-101B at Charleston AFB, SC where his fourth child Jeffrey was born in
1966. Jack was finally accepted to Pilot Training at Reese AFB, TX that year and
graduated 2nd in his class. He was “rewarded with an all-expense paid trip to the 614th
Tactical Fighter Squadron, Phan Rang AB, Vietnam” where he flew 222 combat missions
in the F-100D. Upon return, Jack spent 3 years as a T-37 Instructor Pilot in Selma, AL.
Jack then received orders to fly the F-111A with the 429th Tactical Fighter Squadron in
Las Vegas, NV and was rewarded with “you guessed it, another all-expense paid trip” to
Takhli AB, Thailand in 1972. He flew 147 combat missions in Vietnam, Laos, and
Cambodia. Following his second combat tour, Jack became an F-111 Instructor and
Operations Officer in the 428th Tactical Fighter Squadron at Nellis AFB, NV.
In 1976, Jack was promoted to Lieutenant Colonel (Lt Col). Shortly thereafter, the
entire Wing, four Squadrons, approximately 75 F-111A aircraft, all support units and
personnel moved from Nellis AFB, NV to Mtn. Home AFB, ID where Jack was an
Operations Officer then Commander of the 391st Tactical Fighter Squadron. After a 3-
year assignment involving NATO Allied Air Forces Central Europe in Boerfink, W.
Germany, Jack and his family (who had the unique experience of living autonomously in
a German village) returned to Mtn. Home AFB in 1982. Jack was Chief of Quality
Assurance and continued with Flight Instructor duties until retirement from the Air Force
in 1986.

Jack spent his second career as a civilian and empty-nester when he and Judy
headed to Lancaster, CA. Initially, he was Chief Flight Test Conductor at Rockwell Corp.
In 1988, Jack joined Northrop Grumman’s B-2 Spirit Stealth Bomber program as Chief
Flight Test Conductor until the last day of the 20th century in 1999. Jack’s final
assignment was as Retiree in Boise, ID where he built his house and nurtured the
landscape, tinkered in his shop, and played with his toys. Jack’s greatest joy was
spending the last 18 years celebrating life’s precious moments and milestones with Judy,
Children, Grandchildren, and Friends.

Jack created many wonderful memories for his family. Treasured experiences
were: boating and waterskiing on Lake Martin, Lake Mead, and Lake Powell; alpine
skiing, camping, exploring, and elk hunting in the beautiful mountains of Idaho; fly
fishing the Boise River; bass fishing the Snake River; chukar hunting the Owyhee and
Bruneau canyons; pheasant hunting South Dakota and Iowa; constructing heirloom
quality furniture; feasting on an abundance of delicious cuisine; displaying festive
holiday decorations; relaxing by a crackling fire; administering the Oath of Office to
daughter and grandson at U.S. Air Force Commissioning Ceremonies; flying his
Beechcraft Bonanza, with loved ones, all over the western U.S. for adventures or to visit
friends and grandchildren. It was impressive to witness Jack’s passion, knowledge, and
proficiency regarding high-performance automobiles and planes. He was generous to a
fault. However, Jack’s frugal roots constantly led him to one of his many cheerful, selfimposed
challenges…to get his ski resort lift pass price down to $1 per run before the end
of the day by skiing lightning fast without lodge breaks, and thus sacrificing the more
indulgent side of the sport.

Jack will be remembered as an affectionate, gentle man with a playful sense of
humor; who was unfailingly honest, humble, honorable, and a solid cornerstone for his
family. Characterized by his exceptional attention to detail and keen observation in every
aspect of his life, Jack’s final words to all would likely have been “Check Six!”
Jack is survived by his wife of 57 years, Judy. He is also survived by his four
children: Renee Sheehy, Beth Gall (Rob), Bret Funke (Georgia), and Jeff Funke (Heidi);
his ten grandchildren: Drew, Gabe, Trevor, Sydnee, Drake, Zack, Nick, Isabel, Melissa,
and Mitchell; his great-grandchild Benjamin; and his brother Frank. Jack was preceded in
death by his parents Carl and Ruth and his sister Mary Beth.

Military Funeral Honors and Interment will be conducted on Friday, June 15,
2018, at 2:00pm at the Idaho State Veterans Cemetery in Boise. A Celebration of Life
reception will follow at 3:00pm at Bella Aquila Restaurant in Eagle. In lieu of flowers,
memorial donations may be made to the Boise VA Hospital Community Living Center.

Military Funeral Honors and Interment will be conducted on Friday, June 15,
2018, at 2:00pm at the Idaho State Veterans Cemetery in Boise. A Celebration of Life
reception will follow at 3:00pm at Bella Aquila Restaurant in Eagle. In lieu of flowers,
memorial donations may be made to the Boise VA Hospital Community Living Center.