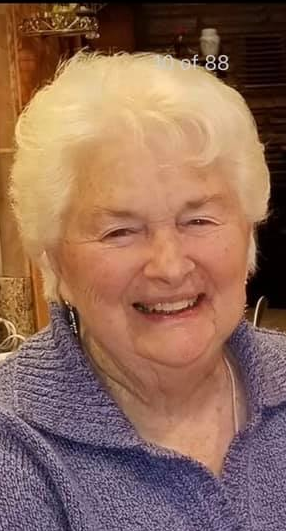 Evelyn Lucretia Rock “Evie”, age 87 of Boise, Idaho, passed away peacefully in her home on Saturday, August 3, 2019. Her four children: Ron, Gary, Jeanine, and Annette; daughter-in-law Monica and niece, Janet Homan, were at her side.

She was born October 30, 1931, in Lohrville, Iowa, to Jesse Carroll Morris and Lena Marie Morris (Leach). She grew up in Rockwell City, Iowa, where she graduated high school with the class of 1949 aka: ‘The 49’ers,’ as did her Husband and sweetheart, Marvin Eugene Rock, “Rocky”.

Evie and Rocky were married on April 20, 1951. They moved to California soon after as Rocky was in construction and saw better prospects in the Southwest. Rocky was a successful commercial construction superintendent and Evie was a wonderful Mother and Homemaker.

Evelyn was the youngest of nine children; six brothers; Carroll, Robert, Dwight, George, James, and Warren, a sister Jessie Marie, and Walter, who passed as an infant.  She was considered to be a ‘second mom’ to many of her nieces. She was devoted to her family, loved to laugh, and was known for her easy sense of humor and smile.  She always was up for a good game of cribbage.

She will be greatly missed by those who loved and knew her. A celebration of life will be planned for some time in the future.