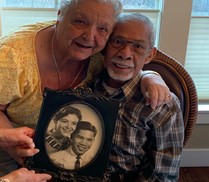 It is with heavy hearts that we announce the transition from this life of Ernesto (Ernie) Magsipoc Ledesma, Jr., 88, on January 15th, 2022. Ernie was born in Culasi, Antique, Philippines, where he enlisted in the US Navy in 1955. He served honorably at sea aboard the USS Butner, USS Altair (AKS-32), USS Kodiak (LSM-161), USS Ashtabula (AO-51), USS Rainier (AE-5), and USS Harold E. Holt (DE-1074), and he was forward deployed with the Cargo Handling Battalion 2 during the Vietnam War. Ernie lived around the world in places such as Spain, San Diego, Seattle, Philippines, and Los Angeles.

During his time in the Navy, Ernie became ill and found himself in the care of a beautiful Spanish nurse, named Maruja Iglesias Rodriguez in Barcelona, Spain. Having found the love of his life, they married on December 27, 1960; together, they decided to live out the “American Dream” and move to the United States in order to provide the best possible future for their family. They settled in Carson, California, where they raised their two children, Roy and Janet. Ernie retired from the US Navy in 1975, having reached the rank of First Class Petty Officer. He then spent another 20 years working for DHL as the station fleet coordinator in Los Angeles. In 2000, they made their final move to Eagle, Idaho where they have lived for the past 22 years. After retiring from the civilian workforce, Ernie spent his time fine-tuning his musical skills, woodworking, fishing, and supporting his grandchildren at sporting and musical events.

Ernie passed peacefully in his home on Saturday, surrounded by his family, wearing a Los Angeles Lakers t-shirt. His final request was to be placed near the window, to feel the warm sunshine on his face, and cool breeze through his hair. Ernie is survived by his beloved bride of 61 years, Maruja, their 2 children Roy (Sharon) Ledesma and Janet (Rob) Tatilian, their 7 grandchildren Kristen, Lauren (Anthony), Teo (Allison), Samantha, Sam (Brooke), Max and Samuel, and 2 great-granddaughters Harper and Ophelia. Ernie is remembered by his loved ones as an avid Los Angeles Lakers and Dodgers fan, a talented musician, a sure-shot basketball player, a skilled handyman, a green-thumbed gardener, and an anecdotal comedian; but above all else, a selfless and wise patriarch, revered by his family and loved by all.

To attend the service virtually please visit http://www.holyapostlesmeridian.net    click the MASS button on the page to view service.

To attend the service virtually please visit http://www.holyapostlesmeridian.net    click the MASS button on the page to view service.