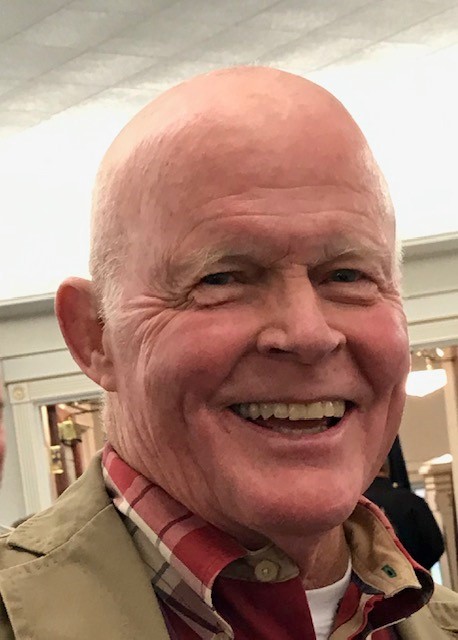 Eric fondly know as Hov, was born May 15, 1943 in Twin Falls, Idaho to Arlene and Harold Hove. He was raised in Kimberly, Idaho, where he was lucky enough to have his grandma Ambie (Alice Wilson) live right next door, his aunts and uncles close by, and a large and loving family to enjoy. He shared countless antics and adventures growing up with his older brothers, Phil McRoberts, Kent, and Michael.  They were all surprised and delighted with the arrival of sister, Julie.

He graduated from Kimberly High School, and attended University of Idaho, where he enjoyed membership in Beta Theta Pi fraternity, and graduated with a degree in Mechanical Engineering in 1966. He was hired by Westinghouse out of college, and retired after a dedicated forty year career with them. His career led him to Butte, Montana; Buffalo, New York; Pittsburgh, Pennsylvania; Salt Lake City, Utah; and back to Boise.  With his quick wit and charming personality, he met and maintained many friendships throughout his travels across the United States.

He met his first wife, Teresa Knox in Butte, Montana. Together they had three children, Nels Hove (Ginger Lowe), Gretchen Gayle (Daniel Garza), and Emily Hove (John Peters).  Although they later divorced, they continued to share their love and joy for their children and grandchildren.

He met the love of his life, Jan Harman, in Boise.  After he pursued her relentlessly, they were married June 30, 2001.  They combined their family and delighted in his children, Jan’s son, Dustin Shelton, and their three grandchildren, Kaiya and Gabrielle Gayle, and Evan Wilson.

Memorable for them was attending the U.S. Open in 2008 at Torey Pines.  He loved watching the Steelers with his kids, sharing a drink and cheering loudly.  He liked walking every day with his dog, Mollie trotting alongside. He loved going out for lunch and meeting with his friends, especially Kyle Allen. Many fun times were shared with family and friends.

He was passionate about the Pittsburgh Steelers, the New York Yankees, and the University of Idaho Vandals.  He especially enjoyed golf..  A highlight of his life was getting a hole in one at Eagle Hills Golf Course, witnessed by Jan, his biggest fan. He spent many years as a runner, and participated in the Robie Creek half marathon for nine years, coaching Jan to run with him the last two years.  From the time he was in college, he did the daily Jumble in the newspaper.

Eric never met a stranger.  He had friends all over the United States that he kept in touch with, and was forever loyal to his Beta Brothers.  If he saw a veteran, he would shake their hand and thank them for their service to our country.  He truly enjoyed people, loved sharing a story, a laugh and a good time.  He was deeply loved and will be greatly missed by the many friends and family members that survive him.

He was preceded in death by his parents, brother Phil McRoberts, and sisters-in-law Sandy Hove and Kelly Hove.

He is survived by his wife Jan, brothers Kent, Michael (Linda Benedetti), and sister Julie (Brian Melton), his children and grandchildren, cousins, nieces and nephews.

A celebration of his life will be held at an open house on July 31 from 1 to 4 at Star Riverhouse, 960 Main St. Star.  Family and friends are welcome, and encouraged to share memories of him.

A celebration of his life will be held at an open house on July 31 from 1 to 4 at Star Riverhouse, 960 Main St. Star.  Family and friends are welcome, and encouraged to share memories of him.