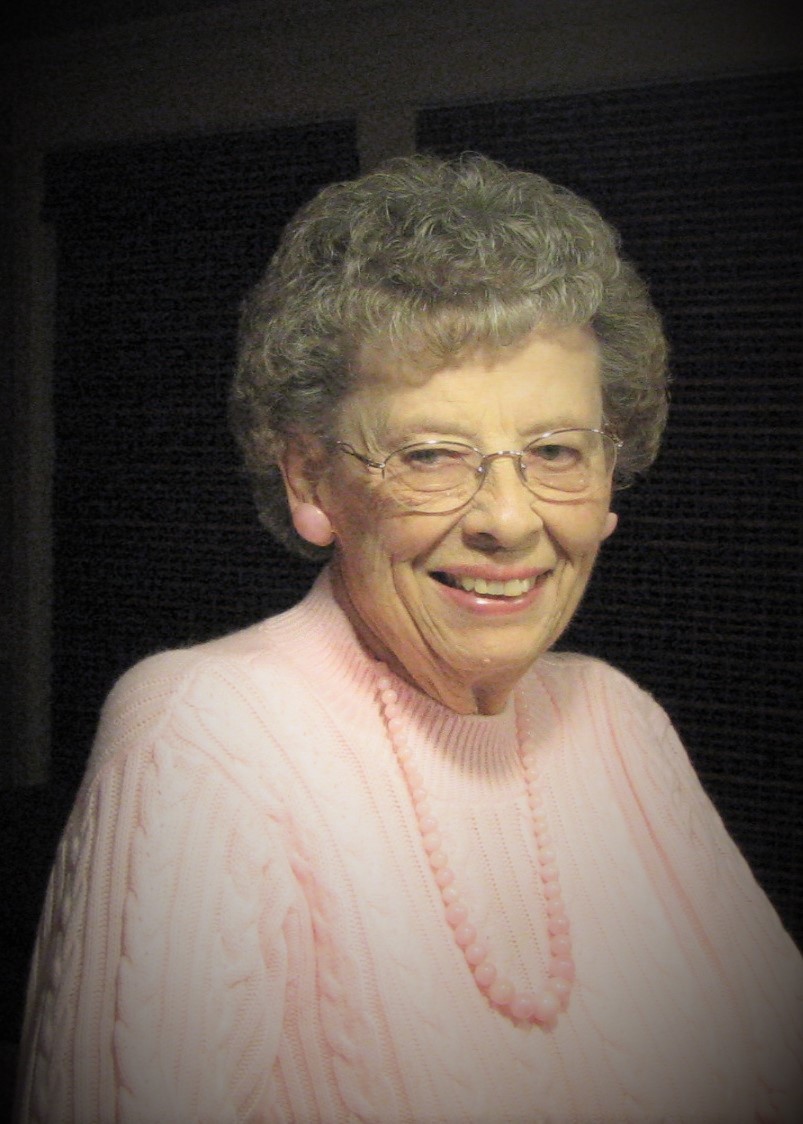 Eleanor was born at home on a farm near Dellvale, Norton County, Kansas, on August 25, 1922, to parents Levi “Harry” (Griffey) Harmonson and Lois May Kintigh Harmonson.  She had an older brother, Verle, and a younger brother, Don, who both preceded her in death.  She grew up with her family on the farm, helping to care for her brothers, especially after her mother died on Easter Sunday, 1938.  When she was a junior in high school, she traveled to Norton to attend school and earned her room and board working for a couple who had a charming nephew – Alfred Glenn.  It was pretty much “love at first sight” but it took a few years, before this young man (our dad) proposed to “his lady.”  They were married on June 8, 1941, in Wichita, Kansas, and celebrated 75 years of marriage in 2016.

They had an adventurous life together.  In the fall of 1941 they moved to Los Angeles, California, where Dad worked at Northrup Aircraft. Their daughter Marilyn was born in 1943, and they returned to Norton shortly after her birth.  They moved to Denver in 1944 and a short time later returned home to Norton where they built a business and added to their family.  Carolyn (Katie) was born in 1947.  A son, Richard, was born in 1951, but died shortly after birth.  The following year, they welcomed their third daughter, Rose Marie (Rosie), and the family was complete.

In 1953, they built a house in Boise, Idaho, and moved their little family of five to a new city and made a home that welcomed everyone for the next 59 years.  Dad started his own used car business, and Mom took care of “the girls,” eventually beginning a career of her own at Idaho First National Bank where she worked for 15 years.  Once all three girls were “out the door,” they really began to enjoy their life together.  They bought a motorhome, joined FMCA, and traveled all over the USA.  Those were some of their happiest days together, occasionally taking their grandchildren with them, and she would often relate the stories of their travels, the places they visited, all the fish that they caught, and the new friends they made.

When macular degeneration ended Dad’s driving ability, they settled back at home, gardening in the backyard, hosting holiday dinners with their ever-expanding family in that same warm and welcoming family home.

Starting in 2009, there were a series of health issues for both Eleanor and Alfred that ultimately resulted in their moving into Plantation Place Assisted Living in December 2011.  Although the adjustment was difficult at first, they grew to love their new “home” and the people who cared for them.  There was always a party to celebrate each milestone birthday, holiday, and anniversary, and when Dad died in 2016, there was a loving and supportive extended family to help us take care of Mom.  Our family would like to express our love and thanks to the staff at Plantation Place as well as the staff of All Care Hospice for providing your loving care for our mom as well as your love and support for our family during this time.

Mom loved everyone, but especially her family – she is survived by two daughters, Katie Sinclair of Meridian, ID and Rosie (Greg) Dexter of Eagle, ID as well as 5 grandchildren, 11 great-grandchildren, and 15 great-great grandchildren, as well as many nieces and nephews.  She never had the opportunity to hold them all, but she loved seeing pictures of them and hearing stories about them.  She took joy and delight in their accomplishments and felt their pain and sorrow during their adversities.  She was always a source of love and support to all of us – we will always miss that.

We are confident that Eleanor has been reunited with “Hubby” as well as her oldest daughter Marilyn who passed in 2006 and the rest of her family who have passed before, but she has left a huge hole in the hearts of those of us she left behind.