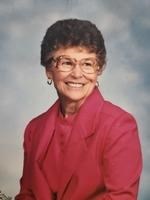 Elaine Meyer
October 7, 1926 – January 19, 2022
Meridian, Idaho – Elaine Kofoed was born in Weston, ID. She was the fifth of nine children. In 1944 she graduated from Weston High School and in the same year, moved with her parents and four of her siblings to Payette.
On January 15, 1945 she married Louis Meyer. The following year, Louis and Elaine moved to Boise. Louis and Elaine were married 64 years before Louis’s passing in 2008. She was the proud mother of six children, four boys and two girls.
Elaine was a loving wife, mother, grandmother and great grandmother. She enjoyed being a Homemaker. One of the happiest times in her life was every time she held a new baby her arms. She loved each and every one of them
One of Elaine’s passions in life was to go fishing and camping with Louis in their R.V. They also enjoyed traveling to England, Ireland, Scotland, Australia, New Zealand, Hawaii and Alaska.
Elaine is survived by her sister Ranae, two sons, Larry (Judy) Meyer and Mike (Sue) Meyer, two daughters, Tonya (Walt) Smith and Vicki Young, ten grandchildren, sixteen great grandchildren and numerous nieces and nephews. She was preceded in death by her husband Louis and two sons, Bob and Pat.
The family is so grateful to the staffs of both Edgewood Spring Creek Ustick and All Care Hospice for the loving, compassionate, and outstanding care they provided Elaine. Thank you for loving our mother and grandmother, as if she was yours.
At Elaine’s request, the family will hold a private gravesite service at a future date. Memorial gifts in Elaine’s name may be made to a charity of your choice.