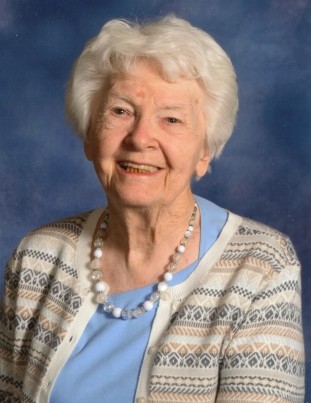 Eileen Joyce Visser passed away Sunday, June 30, 2019 singing hymns till her breathe could no longer sing the words. She was born December 25, 1926 to Arnold and Elizabeth Kravig in Chandler, Minnesota; back then Chandler had a population of 270 people, and that same population count remains there even today. Eileen’s father worked various jobs from being a garage mechanic, to the church janitor, and then a General Store owner. Her brother Arvin Kravig, and her sister Joan Daley were both born in Chandler as well, and they have since preceded her in passing on to glory. During Eileen’s senior year of high school her father decided a change was needed, and he moved the family to Southern California. Eileen finished her senior year of high school at Valley Christian School in Bellflower, California. Her youngest sibling Glenn Kravig was born in California, and still resides there. As a senior in high school Eileen would help her father do the school’s janitorial work in the evenings, which in turn helped pay for her tuition costs. Eileen never shied away from hard work.
One of the first people who reached out to Eileen in California was Wilma Groot, who would bring Eileen to various social and church events. Little did Eileen know that in just a few years Wilma would be her sister-in-law when they married the Visser brothers…. Bill and Ted. Eileen married Bill Visser on February 11, 1948, and she worked as a bank teller until Rick was born in 1951. Her second son Brian was born in 1956, and her daughter Sheri was born in 1960. Bill and Eileen moved from Bellflower to Escondido, California in 1958 where they built a modern home, and would raise their children. They hosted a multitude of events, dinners, gatherings, and overnight guests. The home Eileen created was a welcome abode for extended family gatherings, summertime college workers, international exchange students, women’s craft guilds, world renown dignitaries, and even the down and out town alcoholic. If you needed a place to stay, or a place to meet, or even a place to have a home birth…..Eileen made a place for you.
Eileen was a seamstress with great passion. She always had a sewing room that was full of projects for family and friends. She generously sewed many formals, bridesmaids’ dresses, and wedding gowns for any who sought her out. She also loved sewing clothes for her young grandchildren and did so until her eyesight failed her.
In 1981 Bill and Eileen moved to Eagle, Idaho. Rick led the way north a few years earlier and the rest of the family followed during this 1981 move. Bill’s life was robbed away by early onset of Alzheimer’s Disease, and he passed away at 67 years of age. Eileen is survived by her three children, their spouses, seven grandchildren, and nine great grandchildren. Right before Bill’s health declined, he and Eileen went to Holland to volunteer at the Youth with a Mission’s work in Amsterdam. This was only one of the many service trips that Bill and Eileen embarked upon during their marriage, and Eileen carried on serving others after Bill was gone, giving all that she had till there was no more to give. She will be missed here on this earth, but she has since been welcomed by her Savior in heaven, and we look forward to seeing her again with eyes that see, hands that work, and lungs that can breathe freely.