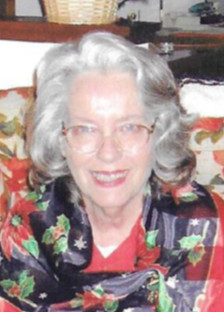 Earlene Mitchell Lemons started the next part of life’s journey when she was called home on Sunday, June 28, 2020. Earlene was diagnosed with terminal Alzheimer’s disease in July of 2016. Earlene was also a breast cancer survivor.

Earlene entered this world on May 17, 1938 in the town of Hamilton, Alabama. She, her parents Ervin and Minnie Mitchel, her brothers and sisters lived in Northern Alabama until they moved to the Mississippi Gulf Coast in 1940. Earlene Graduated from Vancleave Consolidated High School in 1956. After Graduating Earlene attended Perkinston Junior College and Graduated with an Accounting Degree in 1959.

After Graduation the couple traveled quite a bit for work and eventually settled down in Novato, CA in 1963. Their first daughter, Karen Elaine Lemons was born September 20, 1967. Twenty one months later, their second daughter Gerri Elizabeth Lemons was born on June 11, 1969. In 1970, the family of four moved to Pacifica, CA, where they lived for four years, then moved to Reno, NV for four years, then returned to Novato, CA in 1978.

Bill and Earlene remained in the same home in Novato for over 40, where they raised their daughters and ran a Sport-fishing business, the Mister Bill for more than a decade. They both retired while in Novato, Bill as a Senior Field Engineer for Burroughs Corporation and Unisys, Earlene as a Branch Manager for Bank of America.

Bill and Earlene loved spending time with family and friends. Earlene loved to cook and loved entertaining family and friends in their Novato home for many years. The family traveled to Idaho every summer to visit Earlene’s family on JMK Farms from 1969 to 1985 when they bought the Mister Bill Sport-fishing Boat. The family also enjoyed many outdoor activities through the years such as fishing, water skiing, snow skiing and camping.

She is survived by her daughters Karen Elaine and her husband Lane Bennett McClure, Gerri Elizabeth and her husband Joe Peirano. Sister in Law, Eveylene Mitchell, any many nieces, nephews and cousins.

A private committal will be held at Dry Creek Cemetery in Boise.

A private committal will be held at Dry Creek Cemetery in Boise.