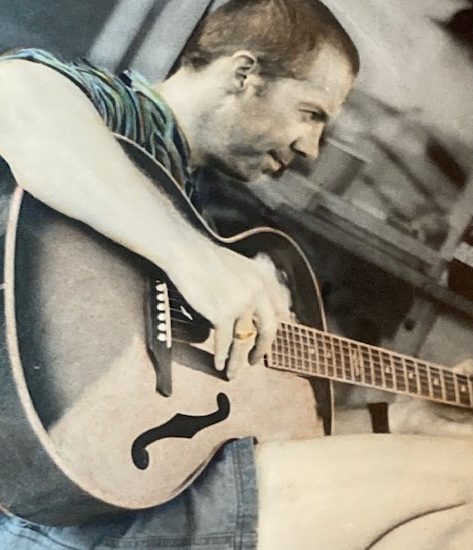 Duncan Tait Filson (62 years), a man of many talents and interests, died at home on November 9, 2021, from cancer.

Duncan was born Aug. 25, 1959, in Elmhurst, Illinois, the youngest of four children of Barbara and John Filson. A self-described “wild child,” he grew up in the Chicago area, ice skating and speed skating on a frozen lake.  He graduated from Woodstock Country School in Vermont where he began his love of music and guitar.  In his early twenties, Duncan lived off and on with his mother in Sun Valley, Idaho, and his father in Cleveland, Ohio where he worked as a bouncer, a logger, a taxi driver, a mime, a garbage collector, a textile factory worker, and a sunglasses salesman.  He was also active in local theater productions and developed his skills on the guitar.  No one can say he didn’t have diverse experiences!

Eventually, interested in the film industry, Duncan moved to Salt Lake City.  There he met Kari Nelson and they were friends for several years.  It wasn’t until Kari was in graduate school at the University of Colorado and Duncan was working in the film business, that they fell in love and eventually married in 1996. Duncan often told his friends that he had “married up.”  After Kari finished her master’s degree in Colorado, the couple moved to Boise so Duncan could attend Boise State University.  Their two sons were born in Boise, Oscar in 2000 and Felix in 2004.

After earning his diploma in 1999, Duncan helped organize the ANSER charter school in Boise, and taught there for two years.  He loved his students, and in later years many of them continue to speak about the lasting impact he made on them.  He left ANSER to start his own computer-based business but eventually began looking for something new.  One of his chess partners, the pastor at Boise’s First Presbyterian Church, suggested he temporarily fill in at FPC for an office manager who had taken another job.  That “temporary” position lasted for 14 years until his retirement in 2021 following his cancer diagnosis.

His family and friends knew him as a man of varied interests, including music (he organized the Limehouse Band, which played in venues around Boise), woodworking, soccer coaching, martial arts, and other activities, always with humor and creativity.  In fact, his sons say Duncan often reminded them that having a good attitude towards work, or any other endeavor, made a difference.  A sign with Duncan’s motto – “Because nice matters” – hung in his classroom at ANSER and now is at his home.

Duncan faced his cancer with both humor and courage, deciding for himself when to end treatment.  Duncan’s family would particularly like to thank the caring and dedicated staff at the St Luke’s Cancer Institute and the St Luke’s Hospice team for their compassion and talented help.         Duncan is survived by Kari, Oscar, and Felix; his mother Barbara, of Boise; and siblings Leslie (Peter) Lysenko, Holly (Phil) Filson/Heath, and Clay (Donna) Filson; and his nieces and nephews.  He was preceded in death by his father, John Filson.