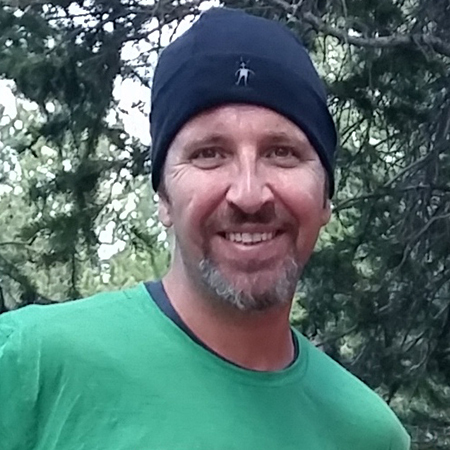 On March 22, 2022, after a long brave battle with colorectal cancer, Drew Hawkes succumbed to the effects of this terrible disease. Drew was a dear person to many. He passed from this world surrounded by his loving family and in the hearts and thoughts of his many friends. He will be deeply missed.

Drew was born in 1969, in Boise, Idaho, at St. Luke’s Hospital where his father was born and where all three of his own children would be born. Many will remember him as “Andy” Hawkes, which he went by until high school when he adopted the name Drew, a designation his older brother, Chris, had taken to using. Following his brother, Drew served in the armed forces of his country, joining the Air National Guard shortly after high school. He completed basic training in San Antonio, TX and specialized skills training in Chicago, IL, then returned to Boise and enrolled as a student at Boise State University where he graduated with a degree in English Literature in 1996. Drew was an early adopter and enthusiast of computers. His first job was in IT at Sears where he worked from 1990 to 1998. This was followed by employment with Albertsons Corporate Office. In 2006, Drew joined the ranks of Healthwise, where he stayed until 2015. He worked briefly with Power Engineers, and in 2019 started with Lamb Weston where he finished his professional career.

People mattered a great deal to Drew. Most of all his wife, Lisa, whom he married in 2004, and his three children, Eliot, born in 1998, Katie, born in 2005, and Topher, born in 2006. He was very close with his father, Bill, his stepmother, Dottie, his dear mother, Kay, and his older brother, Chris. But Drew made connections wherever he went in life and maintained close friendships with many people for years and years.

Drew loved the wilderness. He loved to run and backpack and camp. He loved to see his kids finding joy in the outdoors where he himself found so much solace. He became an avid ultralight backpacker, and his most notable adventure was thru-hiking the John Muir Trail. But he also treasured his many trips to the Sawtooths with his buddies, camping with his family and friends in Grandjean and at Redfish Lake, and taking the kids on hikes along Hulls Gulch Creek, which they called the “Magic River.”

Drew was a wild card. If you knew him, you know how much he enjoyed messing with the people he cared about. He was a good-natured tease and his friends will tell you he ribbed with precision. He had a highly tuned sense of humor and took a true delight in people. But Drew was also deeply serious about the world. He was a lifelong reader. He loved stories, movies, and documentaries about the human condition. He was fascinated by the mysteries that surround us and believed there was something important about our need to explore. He was a close observer of politics and was sincere in his beliefs about our democracy, a combination that the toxic nature of our current culture made difficult.

It would be hard to describe the sense of loss his passing has created. He was just 52, and was a very special person to so many. Our time with Drew was a gift. His spirit is with all of us who knew and loved him.

Drew was preceded in death by his mother, Kay Hawkes, and his brother, Chris Hawkes.

In lieu of flowers, because of the disease that took Drew’s life, please consider donating to Fight Colorectal Cancer https://fightcolorectalcancer.org/, or, because of Drew’s love for trails and public lands, the Idaho Trails Association https://idahotrailsassociation.org/membership/.