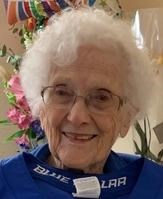 Doris “Bernice” Thomson, BSU Bronco Super Fan. It is with great sadness that we share the news of the passing of Bernice Thomson, our family’s matriarch, at the age of 92. She passed peacefully at home with comfort of family.

Bernice was born March 2, 1929 in Rupert, Idaho and was the second child born to Joe & Laura Barton. Raised on the family farm, she was well schooled in all things country and as a petite, dark haired, baton twirling cutie; she was lovingly protected by her brother, Lyle. Following high school, Bernice attended Idaho State University, met the love of her life and ultimately traded the opportunity of a B.A. degree in home economics for her Mrs. She married Glen Thomson July 17th, 1949 and remained his bride for nearly 50 years at the time of his passing.

Bernice was a homemaker, the mother of four, a business partner, and an avid fan of the BSU Broncos. She was great Mom, a fabulous cook, prided herself in keeping a clean house and in her spare time, played an integral part in the success of a home grown business, Thomson’s Office Supply which they operated together for 43 years.

Bernice was an absolute sweetheart. Blessed with the gift of gab, she always had a lot to say. Quick to smile or share a funny that made her laugh, it was the twinkling of eyes that were most revealing of her true character. She was a warm and welcoming soul who touched the hearts of those she met.

Bernice excelled in all things home economics and was skilled at ceramics, sewing, needlework, cooking and baking. She had famous baked beans, chocolate chip cookies, brownies and yummy or icky fruitcake depending on which of the kids you asked. She was always quick to volunteer to put together a family or neighborhood dinner.

Bernice found joy in everything as she could make any task fun, even going to Doctor appointments. Her moto was live every day to its fullest. She enjoyed camping and metal detecting in her younger years. She taken pride in having the best looking flowers and yard in the neighborhood. It was when she and Glen built the cabin in 1977 that she found one of her greatest joys. So many stories to reminisce with the Bunch’s and Foster’s in Garden Valley. She spent 20 plus years having a saltwater reef aquarium, naming the majority of the fishes. Bernice would never turn down the opportunity to travel. Florida, Hawaii, Cancun and Yellowstone Park (where she loved to spot moose) were some of her favorites. Christmas was her favorite time of the year. Decorating began in October. Every square inch of the house was covered in lights and Christmas villages. The crown jewel was finding the perfect real Christmas tree which was always flocked. Her decorations made it onto KTVB several times.

Bernice was the ultimate Boise State fan. She started attending football games in the 1960’s when Lyle Smith was coaching. She had season football tickets since 1972 and basketball tickets since 1983. All fall activities had to be cleared to make sure it didn’t interfere with football. Her youngest son Scott had his wedding take place in Honolulu, just a few days before the Boise State game there. Countless football related trips to Reno, Honolulu and her favorite the Fiesta Bowl. Bernice and Coach Harsin became close buddies during his Head Coaching time in Boise. Always sharing their pregame tradition of a hug and a few words of encouragement. The duo was featured several times on Maggie O’Mara’s Sevens Hero on KTVB. From there she was a local celebrity. Fans would come up and say “hi” regardless of where she was and she loved every minute of it.

Bernice is survived by Pat (Anna), Kent (Star), Peggy, Scott (Brandie). All four of her children are Boise State Alumnus. Grandchildren, Robert, Chris, Alison, Loren, Stephanie, and Haley and several great grandchildren. She is preceded in death by her parents, Joe & Laura, her husband Glen and her brother Lyle.

Due to upsurge of Covid, the family is refraining from any gatherings at this time. An announcement will be made at a later date regarding a celebration of Bernice’s life.

In remembrance of Bernice, the family is requesting donations be made in her name to her Boise State Broncos through the Bronco Athletic Association, 1464 W University Dr, Boise, ID 83706.
Go Broncos!