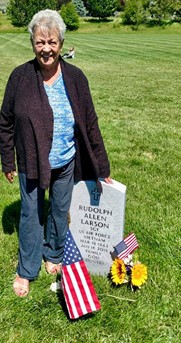 Donna Lou Hansen Larson was born in Ogden, Utah to Alta Frodsham and Guy Hansen in 1943, the youngest of the Hansen siblings. Donna gave birth to Brent, and then Craig in Fontana, California before meeting Al Larson in 1967.  Just a few short years later, the two got married in Lake Tahoe, Nevada before moving to Culver City and celebrating the birth of their daughter, Kimberlina Dawn.  The family of five moved to Washington, where Donna began her work in hospitality.  She started as a waitress at Oak Tree Restaurant in Woodland, before moving to the Red Lion Corporation.  She started as a waitress, but quickly moved up to the dining room and catering manager.  She was then approached for a job with Royal Oaks Country Club as their General Manager, and was chosen out of 73 other applicants, and the only female to boot.

In 1997, Donna was offered a job at SpurWing Country Club as their general manager and moved to Boise, Idaho with Al, Kim and Christa.  Not only did Donna make a great number of friends at the country club, but she was loved by many and had tried to keep in touch with as many of them as she could after her retirement in 2009.

After her and Al retired, the two spent a lot of their time volunteering at the Veterans of Foreign War Post 63, where she held the position of treasurer and helped father donations for the Post’s many auctions and raffles that were held for those who needed help.  She would also cook for their daily dinners whenever she could.  Donna would also enjoy dinner and conversation at The Curb Restaurant and spending her time doing genealogy and learning about the family. Donna always loved spending as much time as she could with those that she loved.

When Al passed in 2018, Donna had to find her way in an unfamiliar world after 49 years of marriage.  She spent time with her son, Craig, in Montana before living with her granddaughter, Christa, in Pocatello, ID.  After some much needed time with Christa and her fiancé, Brandon, Donna moved back to Meridian in 2020, where she decided to spend the remainder of her years.  Donna went back to her friends at the Post and the Curb, and made new friends at Hooligans, and spent 2 wonderful years living her life to the fullest and creating many memories with all the people she had met.

Donna is survived by her 3 children, Brent, Craig and Kim. Their spouses, Tish, Michele, and Scott as well as 5 grandchildren and 3 great grandchildren.

Donna passed unexpectedly on February 5th, 2022 at St. Luke’s Hospital in Meridian. While unexpected, her family was able to spend her last days surrounded by family. Her final resting place will be with Al at the Idaho State Veterans Cemetery in Boise, Idaho

A funeral will be held on February 15th, 2022 @ 2PM at the Idaho State Veterans Cemetery located at 10100 N. Horseshoe Bend Road Boise, Idaho.

Many celebrations of life are surely to be had, and details of those events will be posted on her Facebook page and shared by her family.

Her final resting place will be with Al at the Idaho State Veterans Cemetery in Garden City, ID, where her funeral will be held on February 15th, 2022 @ 2PM with Bowman Funeral Parlor. Many celebrations of life are surely to be had, and details of those events will be posted on her Facebook page and shared by her family.