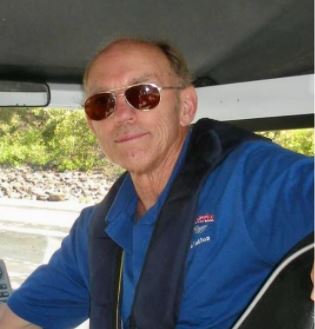 Dennis Steven Marguet, 74, of Cascade, Idaho, passed away on January 27, 2022 due to complications from cancer which was caused by exposure to Agent Orange during his time in the military.

He was born in 1947 in Los Angeles, California, but he considered Cascade, ID his home. He attended high school in Southern California. After high school, he enlisted in the US Marine Corps in 1965. Dennis went to VietNam in 1966 where he earned several ribbons and ended his enlistment as a sergeant in 1969. After his time in the military, Dennis went on to college, eventually earning a master’s degree in business administration.

He is survived by his wife, June to whom he was married to for forty-two years and his five children: Tina Pieper Marguet and husband Mark of Houston, Texas; Kimberly Kielty and husband Michael of Boise, Idaho; Stephanie Stetler of Munford, Tennessee; Melanie Watson and husband Scott of Elkhart, Indiana; Scott Marguet of Kansas City, Kansas, and his three brothers, William, Michael, and Terrence. In addition, Dennis had twelve grandchildren and one great grandchild, and numerous nieces and nephews.

Dennis worked in the insurance industry for 25 years and retired as an insurance broker in 1999. He also had invested in many types of real estate across the country.

Dennis lived life to the fullest, experiencing as much as he could. He loved thrill seeking adventures such as white water rafting and even skydiving. He raced cars professionally and was a driving instructor. He was an accomplished water skier and snow skier where he traveled across the US to compete. Dennis was a scuba diver and traveled to remote parts of world diving and eventually became a divemaster. He was an accomplished video documentary producer and in 2002, he won an international competition for his underwater conservation documentary. He most recently enjoyed jet boating on Idaho rivers as well as fishing, hunting and riding on his off road vehicle. In his motorhome he traveled with his wife, June, all over the US, Alaska, Canada, New Zealand and throughout Central America. Dennis and June also spent a great deal of their time traveling and scuba diving all over the world, including places like New Guinea, Galapagos Islands, Hawaii, Russia,Tibet, Thailand, China and parts of South America, Europe and Africa.

It was important to Dennis to be involved in the communities in which he lived. He served as president of the Southern Valley County Recreation District, and was proud of his role in securing a recreation center and a year round swimming pool in his hometown of Cascade. In addition, Dennis was an integral part in the development of the All Wars Memorial in Danville, CA. His concept was to expand recognition not only to those who died, but to those who served and their family members.

He was a member of the High Country Ramblers-Good Sam Club, The Western White Water Assoc., Intermountain Jet Boat Assoc., The American Legion, VFW, Disabled Veterans of America and VietNam Veterans of Diablo Valley, a group he co-founded. He loved to share his knowledge and taught night classes in Boise.

He will be deeply missed by his family, friends and all who knew him.

Services will be held at the Idaho State Veterans Cemetery: 10100 N. Horseshoe Bend Rd., in Boise on Friday, June 10th at 1:00 pm. In lieu of flowers, please consider a donation to the American Cancer Society or Disabled Veterans of America.

Services will be held at the Idaho State Veterans Cemetery: 10100 N. Horseshoe Bend Rd., in Boise on Friday, June 10th at 1:00 pm. In lieu of flowers, please consider a donation to the American Cancer Society or Disabled Veterans of America.