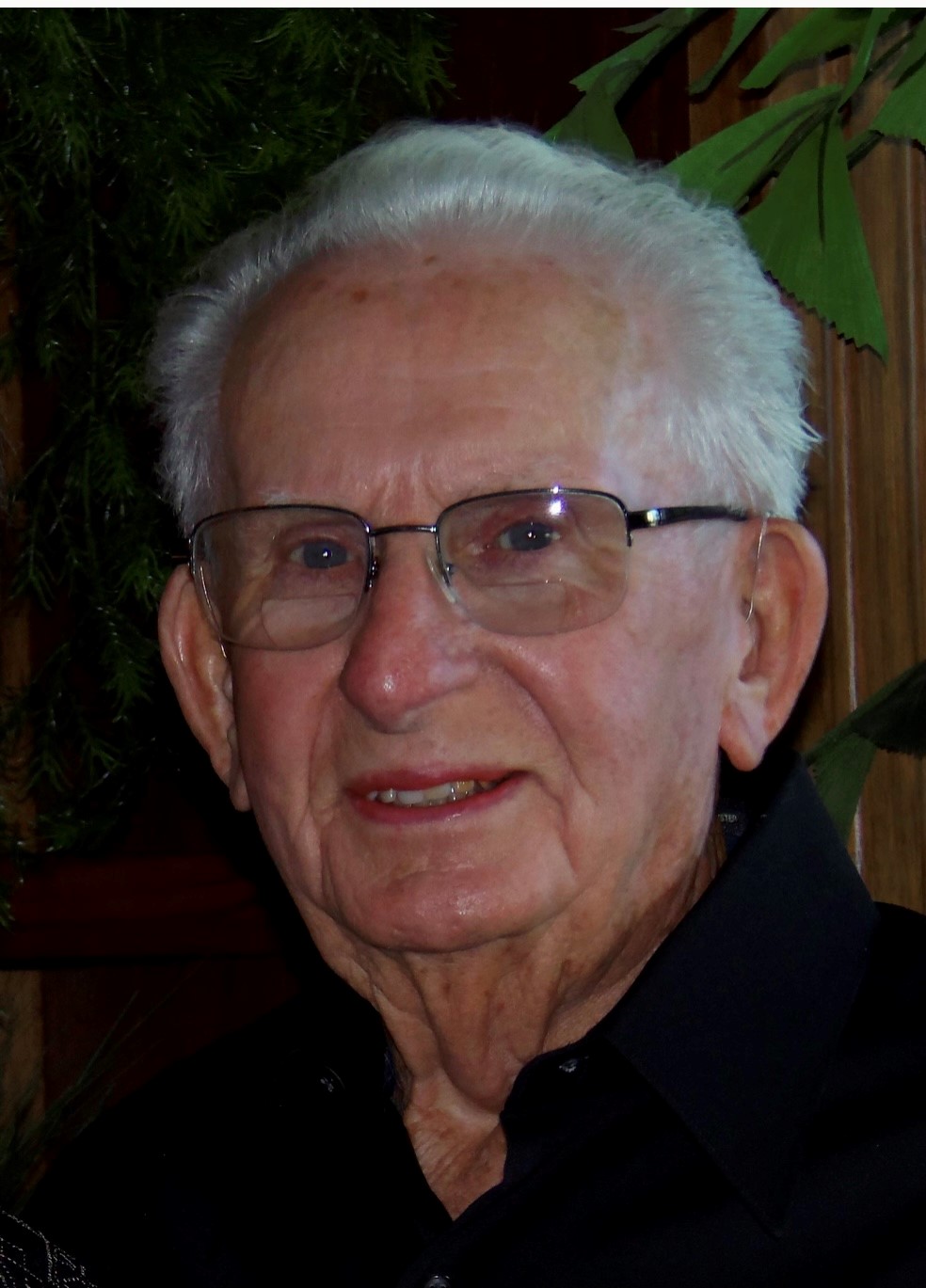 The eldest son of Margaret Nolan and Delos Benson Price, Del was born on April 7, 1925 in Butte, Montana.  As a young boy, the family moved to Missoula, Montana. A few years later, they relocated to Portland, OR, where he was introduced to and developed love for basketball. In the 6th grade, his family once again moved to Grants Pass, OR where he became further involved in his favorite sport (basketball), staring on the Jr. High Basketball team.  Within two years, the family moved to Lakeview, Oregon for the start of the 8th grade, where he was the leader on his 8th grade team that challenged the high school varsity team and were victorious.  It was in Lakeview that he really excelled in basketball and became known by the nickname of “peewee”.  He was the 1st basketball player in Lakeview High School history to letter all four high school years in basketball.  It was due to his basketball prowess that he was awarded a full ride scholarship to the University of Oregon.  However, WW II interrupted this dream – upon learning that he was going to be drafted, Del, along with a group of 6 friends, enlisted in the Navy.  He was never able to fulfill his dream of playing basketball in college, but always retained his love for the sport; occasionally surprising his children and grandchildren that age had not diminished his skills. Another great love of his was music – particularly the trumpet.  He was a “natural” talent with music and even formed a successful dance band in high school that performed in school and civic activities.

In the Navy, Del was served as a Pharmacist Mate and assigned to the USS Colbert APA (serving in the pacific):  this ship carried troops for the planned invasion of Japan.  Fortunately, the war ended (while they were waiting outside of Japan) and they did not have to invade.  After WW II – Del traveled to Washington where he worked in a Mortuary his Father owned.  He attended mortuary school at the San Francisco College of Mortuary Science and became a licensed Funeral Director.  It was during this time (Late November 1948) that he met the love of his life – Fay Nelson (of Preston, Idaho) – while she worked as a nurse at Auburn Hospital.    As was usual for Dad, he wasted no time and began dating her in December 1948, proposed to her with a dozen roses, on Valentine Day, 1949 and they were married 5 days later on February 19, 1949.  Not long after, their marriage was solemnized in the Logan, Utah temple of the Church of Jesus Christ of Latter-day Saints.  This began a lifetime of faithful devoted service to the Savior and church.  It was very clear to all who knew Del and Fay Price that they loved the Savior, were devoted to His church and loved spending their lives serving others, believing “when ye are in the service of your fellow men, ye are only in the service of your God.”

While in Washington, they had their first son, Delos Benson Price III in March of 1950, and second son David Nelson Price in June 1953.  A few months after David was born, they moved to Inglewood, California where Del worked in management of the Harden Flanagan Mortuary.  In 1958, the family relocated on the other side of the LA area to El Monte, California where he managed Schanel Mortuary.   About a year later, they were blessed with the birth of their 3rd son, Charles Nolan Price.

In 1962 the family moved north, to Citrus Heights, California and within a short time, Del established Price Funeral Chapel.  To the great satisfaction of Del and Fay, their oldest son, Ben Price, continued the business and a short time ago, Price Funeral Chapel became a 3rd generation business, when Ben’s eldest son, Jeremy took over the business and also has Ben’s other son, Kyle working in the business. It was shortly after his establishment of Price Funeral Chapel that Del was called to serve as Bishop of the Citrus Heights Ward for the Church of Jesus Christ of Latter-day Saints.  During this service he led the ward in building an LDS Chapel for Citrus Heights (guiding the raising of funds, and member labor to help build the chapel – when completed, it was dedicated by an apostle of the church, Elder Harold B. Lee. During this busy time, he was busily involved in community service and leadership in Rotary, Chamber of Commerce, Little League, American Legion, served as a committee member of the Park District and on the board of Camillia Memorial Lawn.

While living in Citrus Heights for over 25 years, Del served in numerous capacities in the Church of Jesus Christ of Latter-day Saints, including directing choirs, teaching Sunday school, and serving on the Stake High Council. In 1979, Del and Fay were called to serve a church mission to Scotland, where they faithfully served for 18 months.  Not too long after returning from this mission, they retired to their “dream home” at Lake of the Pines, near Auburn, California, with Ben Price taking over Price Funeral Chapel.  This move to Auburn gave him the opportunity to once again pursue his love of sports and he became an avid golfer and Del had the time to be involved with his friends in golf activities. During this time at Lake of the Pines, Del continued his dedicated church service, by accepting a calling to the Auburn Stake High Council and subsequently was called to be the Patriarch of the Auburn, California Stake – where he served for many years. Then, in 1998, Del and Fay once again set an example for their children and grandchildren of complete dedication to the Lord, as they accepted the call to serve a 2- year church mission to Uganda/Kenya, Africa – establishing the CES programs in those countries.

After returning from this mission, Del and Fay continued to be actively involved in church service and he resumed his calling as Patriarch in the Auburn Stake. Their service also included being called as weekly ordinance workers in the Reno, Nevada Temple; one of their most cherished service opportunities.  Del and Fay also enjoyed traveling to many places in their RV on their own and with friends.  In 2006, they decided it was time to be closer to their children, grandchildren and great grandchildren in the Boise, Idaho area.  So, they sold their home in Lake of the Pines and built a new “dream home” in Eagle, Idaho where they continued to enjoy traveling together and spending time with their posterity.  They also continued their church service in the Eagle 1st Ward, where they developed close eternal friendships with families in this ward and the wonderful members of the Eagle 1st ward made a “forever” difference in Del and Fay’s lives.  During this time, they continued to their love and devotion to temple service, with weekly temple attendance together and with a group of friends.  Del also continued his enjoyment of golf – becoming involved in the Men’s Golf Group at Eagle Hills Golf Course.  As he had shown in his earlier years with basketball, Del was very athletic and excelled in golf; on three occasions scoring a “hole in one” and often he would beat his age with his golf score – quite an accomplishment for any golfer.  He developed so many dear friendships with this men’s group and in the Eagle 1st ward and we will always be grateful for their personal care and concern for the health challenges of Del and Fay over the later years of their lives. A very enjoyable hobby Del had involved wood work – he loved to make beautiful clocks for the family, plaques to commemorate special events or accomplishments, pen sets for his sons, and doll cribs for his granddaughters and great granddaughters – all cherished memories.

From the time they moved to California to begin management work in the Funeral Business, continuing with the establishment of Price Funeral Chapel, through their two foreign missions for the Church of Jesus Christ of Latter-day Saints and many years of faithful church and community service, Del and Fay have been inseparable – an example to all of us of unity, love and devotion.  Del never let Fay open a door – he always did it for her, they always held hands for prayers – she was his “friendoe”.   His greatest time of sorrow was to see her suffer from the ravages of cancer – he served her with complete devotion from her 11-hour surgery at the Huntsman Cancer Center on their anniversary, February 19, 2015 through her passing on January 31, 2016.  As much as he has missed her, he has always expressed gratitude to Heavenly Father that she was freed from her suffering.  Now, his “friendoe” and the love of his life is united with him to continue as his best friend in eternity – his eternal companion.  While we will deeply miss Dad, as we also miss Mom, we are grateful that the two of them, who were inseparable in life will be together for eternity – for this we will always be grateful, for we know it is true. Del and Fay are survived by a brother, Richard T. Price and a posterity that began with 3 sons: