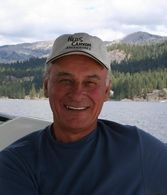 Our beloved husband, father, grandfather and friend passed away at home September 1, 2021
after battling many serious health problems for several years. He was born in Carson, North
Dakota and always spoke lovingly of his childhood in Leith, North Dakota where he ran freely
with friends, hunted, played sports and jokingly bragged of being one of the star basketball
players in a graduating class of 8. Deane attended the North Dakota School of Forestry and
graduated from North Dakota State University with a BS in Biology and a Master’s degree in
Range Science. He was a staunch NDSU fan until his dying day. After college, Deane took a
job with the Bureau of Land Management, which started a career with the BLM that lasted 39
years. He lived in several places with the BLM, starting in Vale, OR and moving on to Burley,
ID; Boise, ID; Washington DC; Phoenix, AZ; and Salt Lake City, UT, where he became a district
manager. Deane loved Boise and decided to retire here. Deane used to describe himself as a
“black lab”—loving any activity that involved a ball. He loved almost all sports and got
involved in Senior softball as a retiree which built wonderful friendships that lasted the rest of
his life. He was also involved in golf, city rec volleyball, bowling, and downhill skiing.

In 2009 Deane met his wife, Carrie, at the “Over 40s Singles Coffee” at the Methodist Church.
They were married in 2011 and had a wonderful life hiking, dancing and traveling until Deane’s
illness prohibited many of these activities. Deane was game for almost anything. He was
known for his playfulness and wonderful sense of humor.

Deane is survived by his wife and his three children Eric Zeller (Nancy Beach), Stephanie Zeller
(Mike Martin), and Barry Zeller (Roxanne Zeller), as well as 10 grandchildren and 6 great-grandchildren.
Deane was dearly loved by his friends and family and will be greatly missed. A celebration of Deane’s life will be held at a later date.