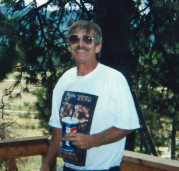 David John Urry, 77, of Boise, passed away October 25, 2020, at a local Boise hospital of an age-related illness. Dave was born in Boise, Idaho at St. Luke’s hospital on October 6, 1943 to parents William and Hilda Urry, of Boise.

He was an avid outdoorsman, who loved fishing, hunting and just being in the mountains. Garden Valley, Idaho was one of his favorite retreats. He also loved to fish Herrick Reservoir, Horse Thief Reservoir, Cascade Reservoir, and C.J. Strike Reservoir.  His wife; Janet, daughter; Debby and son; Troy often accompanied him in his many trips to the wild areas of Idaho.

Dave belonged to the Idaho Laborers Union for many years working in the concrete business as a HOD carrier. He was collecting a lifetime pension from the unition at the time of his death. Dave was also an aficionado of the culinary arts, having graduated from Boise State University with a degree in culinary arts. He was an excellent souz chef at the Gamekeeper for years, one of Boise’s most respectable restaurants. After satisfying palates for countless customers, he later became the top traveling salesman for Bon Appetit.

Dave’s favorite sport was Nascar, which he loved with a passion unsurpassed by any armchair driver. Kyle Larson was his favorite driver. Dave was also an avid BSU football fan, for obvious reasons. His favorite NFL football team was a regional one, the Seattle Seahawks.

David was a longtime, loyal friend to his three favorite pals, and constant visitors: David Ball, Keeven Potticellie and Wolf Hoffman. Above all, he had a great love and respect for his nephew, Scott Holen. So much to that he named his caring nephew beneficiary of his entire estate.

Dave and his wife Janet purchased their dream home in Boise in 1976, where he remained until his passing. He is preceded in death by his loving parents; William and Hilda Urry, daughter; Debbie, son; Troy, sister; Imogene Holen (Ken).

Not only will Dave be missed by those who knew him, there are many who will surely miss his fabulous home cooked country style meals. Above all, everyone will miss his contagious grin, upbeat attitude, unbending loyalty and off the wall sense of humor. He was often the butt of many jokes and pranks.