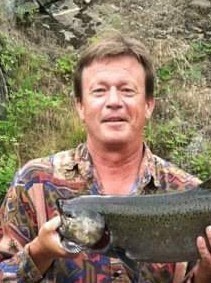 Danny started out life mostly, as we all do, an innocent sweet kid. But he was also said to be quite ornery when he set his mind to something. He always knew right from wrong and had his heart in the right place. From a personal journal dated 1970 at 10 years of age, he mentions going to a Scout Pack meeting and he also noted specifically on the 2nd of February “the Groundhog saw his shadow” and later in the month his pet chicken “Marshmallow” laid her first egg. Other early memories included building a love for the outdoors, chopping wood and feeding the family stove, building fires outdoors, swimming and playing capture the can with his friends and brother in the canal near his home on Dalton Lane and could also be found zipping around a vacant lot near his childhood home on his Suzuki dirt bike. He particularly enjoyed going to eastern Oregon to be with his extended family to go sledding in the winter, fishing, and exploring on the Snake River and in the Wallowa mountains with his cousins. When recalling his younger brother, John Walker said “he was a kid, that’s for sure.”

Daniel was active in the LDS church growing up and decided one summer at the age of 16 to take part in an excursion to Hawaii planting, picking, and laboring in the pineapple fields; which for a boy from Idaho was something that opened his eyes. During this period in his life, he developed a special bond with his Uncle Emery Cameron that would last a lifetime. Neither one had conventional thinking, so they clicked well, and had a relationship of respect and learning. His Uncle Emery turned him on to gold mining, so he spent quite a few summers at Burnt River and in Nevada on claims as well as in Idaho City, looking for that glint of yellow in his wash pan.

Daniel graduated from Meridian High School class of 1979 and then started his longtime career in sales. First as a sales manager at the Lighting Center in Boise, Idaho. He then made his way back to Hawaii to work at the Maui Surf Hotel and enjoyed island life for a spell. Daniel returned to the Treasure Valley where he then married Melinda Meininger (Nothern) and brought two children into their life, Jacquelyn and Brendan.

Daniel continued his sales career as a representative for multiple local companies selling both maintenance services and IBM typing systems for the majority of the 1980’s. He then decided to follow in the footsteps of his father and put his sales skills to work in the world of providing insurance products to many people in the Treasure Valley.

In 2003 Daniel, with the help of his cousin, Charlie Loughmiller, started Buena Vista Publishing.

With his natural ability in sales and unique personal vision he provided outreach and connection within the community. More than anything these connections provided Daniel with a genuine level of satisfaction in his work. The distribution of his publication covered the Treasure Valley, Magic Valley and Eastern Idaho, demonstrating his strong desire to build a legacy of connection and trust in the community.

In 2008, he hired Jodi Sigmont to assist him with his work. Little did he know that he also had found his next life partner after having parted ways from his first marriage. He enjoyed their personal relationship as well as working together for the last 14 years.

When Danny wasn’t working on Buena Vista, he was wholly focused on and adoring his grandkids, while spending time with them doing the things he loved and supporting them in the things they loved as well.

Danny was a lover of animals, especially the old family cat “momma kitty” and his most recent love “Oreo” a black and white mottled Australian Shepherd. He really enjoyed motorcycles, mainly riding them. He was interested in bridges that were of unique architecture. He loved music – not of the mainstream variety, but only what made him happy. He liked fishing, camping, sailing, and tennis. He was a man of simple loves and interests that were uniquely his.

As he aged, Daniel’s love of his family only grew stronger. He was a fantastic Grandpa, the “apple” of his grandkids’ eye. He was invested in making sure his children found success and supported them in who they were and in the ways they needed. He had endless friends that he made in his travels and really enjoyed connecting with new people. His smile was perfectly smirk-like, and he had lovely dimples that shined when he heard a truly good sarcastic remark or zinger that hit him just right. He was Danny, he was Daniel, Dan, Dad, Grandpa or bop and friend. Most importantly, he was himself.

A funeral will be held at the Church of Jesus Christ of Latter-day Saints located at 4921 N. Mitchell St. Boise, Idaho on February 6th at 11:00 AM with viewing from 10:00 AM to 11:00 AM for family and friends. Interment will follow at the Dry Creek Cemetery.

There will be a service on Monday, February 6, 2023 at 11 am at the Church of Jesus Christ of Latter-day Saints building, 4921 N Mitchell St., Boise, Idaho.  There is a viewing starting at 10 am, and a grave dedication will follow the service at Dry Creek Cemetery, 9600 Hill Rd, Boise.