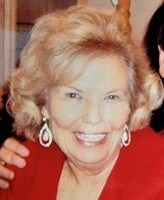 We had the best Mom in the whole world! Our Mom was such a beautiful woman and truly a lady. When she walked in a room with her beautiful blond hair and ladylike demeanor you were immediately drawn to her. You are so loved and you will be missed!

Claire A. Farber was born in Wolbach, Nebraska to Ellen and Pete Teilmann. When she was 12 years old her family moved to Boise, Idaho. She tells the story of arriving at the train station and looking down at the capital and feeling like she had just moved to the most beautiful place on earth, Boise Idaho. While attending Boise High School she was involved in Concert Band-Clarinet, Scarlet Skirts, and selected as a Boise High May Queen. During World War II she wanted to support her country by selling war bonds and also would attend chaperoned dances as a minute maid in Mountain Home for the military officers.

In November 1948 our Mom met her future husband Keith at a friend’s engagement party. He was so smitten by her beauty he soon called her for a date. They had a whirlwind courtship and he asked her to marry him on the shore of Payette lake at the family cabin in McCall in July 1949. People from all over the country came to join their celebration of their happy marriage on September 1949, with a reception at the Crystal Ballroom in Boise. From that day forward they started their amazing journey by spending their honeymoon at the Beverly Hills Hotel.

For over 36 years they were partners in the clothing business where Mom would go with him to market to buy clothes for their women’s clothing stores which were named the Vogue in Ontario, Earl’s in Caldwell, and Sandy’s in La Grande. We would hear her say you don’t need to go to heaven just come visit me in Ontario. Yes, she loved living in Ontario and had so many dear friends and she was very involved in so many clubs and organizations. Mom was her daughter Christy’s Silver Sage girl scout leader from the beginning of brownies to her senior year in high school. Mom was so admired that she was asked to be on the Board of Directors of the Silver Sage Girl Scouts Council in Boise, Idaho. To celebrate all the years of scouting Mom and Klyda Bertleson (the other scout leader) took their girl scout troop to California visiting the set of Good Morning America, Johnny Carson and danced to the music of the BeeGees on the set of Saturday Night live. During her time in Ontario she learned to golf and played on the women’s’ golf league and was also president. To this day the ladies who played golf still get together and have lunch. She loved this group of athletic women! She also learned to play bridge and for over 40 years she would get together with the most delightful group of ladies who were also her dearest friends.

Mom loved to cook and entertain. Wow, she would set the most beautiful tables with the most beautiful linen tablecloths for her gatherings. Our parents also belonged to a gourmet group where she served the most exquisite food. One of her guests a doctor said, “Claire your home is so meticulously clean I could do surgery in here.” Throughout her life she and our Dad loved to travel the world. She was a wonderful traveler and loved the adventure of seeing new places and tasting new foods. Yet, we do remember one complaint from our Dad and that was the weight of her many suitcases! Mom and Dad traveled to over 60 countries and 6 continents. Summer or winter she had her bags packed and ready to go.

What fun she and her lifelong friend Harriet Flanagan had living on the same block entertaining together and watching their kids grow up. Many stories of the Farber and Flanagans are still enjoyed today with lots of smiles and laughter.

Mom would say over and over again how fortunate she was to be able to spend time in McCall with family and friends. For over 70 years she watched her kids, grandkids and great grandchildren run, swim, and water ski on beautiful Payette lake. One of her favorite stories was telling us how she took 2 of her kids to learn to ski at the little ski hill in McCall in 1960. After that she was hooked and she was the one who started our long time love for skiing at Brundage Mountain.

You can tell she was very adventurous. We can’t tell you how many lakes our Dad and Mom hiked into. He would carry the backpack with the boat and fishing poles and she would carry the lunch. As soon as they arrived at the lake he would blow up her air mattress under a tree, where she would read her favorite book and watch her husband catch and clean the fish. He smiled all the way up the mountain and she smiled all the way down the mountain.

Over the years one of her true joys was spending time with her grandchildren and great grandchildren. Whether it was her traveling adventures to fun destinations with Scott, Kim and Rhett or having Stephanie, Jackie and Sierra spend time at McCall with their Gigi and Papa. They truly brought her so much joy!

One of her guiding lights was her relationship with her mother-in-law Ethel Farber. For almost 40 years’ Mom and Ethel enjoyed family gatherings and cooking large family meals. Many of the Missouri recipes passed down to Mom’s children and grandchildren were those taught to her by Ethel.

Friendships and lasting relationships were very important to our Mom and Dad. In 1949 the Edmarks, the Grants and the Farbers all got married in the month of September! For over 50 years’ Mom and Dad celebrated their anniversaries together with these very special couples and called themselves the “Anniversary group” with a yearly celebration with such dear friends. Then Bob and Lotti Snyder joined the group. The guys were all fraternity brothers of Sigma Alpha Epsilon and oh yes, did they have fun! Later in life Bob Snider and Mom continued to enjoy a special friendship.

Upon retirement they spent the winters in Tucson at Ventana Canyon golfing together, meeting new friends and enjoying the warm weather. One of their favorite hikes was up Sabino canyon in the foothills.

Her faith was also very important to her as she was a member of the United Methodist church where she helped with summer bible school and later St. Paul’s Lutheran church.

Our family is deeply appreciative for the outpouring of love, prayers and support in many heart-felt forms from too many people to name individually, thank you!

A celebration of life will be held at the Elks Lodge – 20 SW 3rd St, Ontario, OR 97914, on June 19th, 2021 at 2:00 pm. Services are under the direction of Bowman Funeral Directors. Condolences may be left for the family at www.bowmanfuneral.com

A celebration of life will be held at the Elks Lodge - 20 SW 3rd St, Ontario, OR 97914, on June 19th, 2021 at 2:00 pm. Services are under the direction of Bowman Funeral Directors. Condolences may be left for the family at www.bowmanfuneral.com