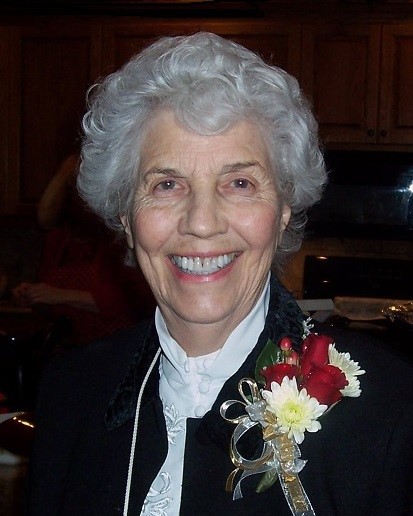 Bonnie Louise Miller Fisher passed away at her home in Star, Idaho on January 29, 2021. Passing came in the presence of her loving family consisting of her husband, Garyl Fisher, her daughters and their husbands; Caryl Ann Christensen (Scott), Barbera Diana Bashan, Nancy Lin Hochhalter (John), and Rebecca Rosalee Hansen (Gary). She proceeded in death by her oldest daughter, Laura Louise Grimes McGlenn (Roger).

Bonnie became highly proficient in her four-year high school training in stenographic/secretarial skills. Her ability was so outstanding it attracted War Department employers who offered her a secretarial position upon graduating. With World War II ending in 1945, Bonnie continued working for the War Department in both Great Falls and at the Fourth Air Force Command Base in San Rafael, California where she had transferred. She had the honor to serve as personal stenographer to General H.H. (Hap) Arnold, the first five-star General of the Air Force. In 1947, Bonnie left military employment and secured a position with one of California’s largest supermarket chains, serving as executive secretary to the president. While thus employed, she met Garyl Fisher a newspaper reporter in San Leandro, California, a neighboring city to Oakland where Bonnie was employed. A romance blossomed that culminated in marriage in December of 1948. From that time on they were inseparable. Life’s journey blessed them with five beautiful daughters who gave them twenty grandchildren, fifty-eight great-grandchildren, and three great-great-grandchildren. On December 4, 2021, the couple celebrated their 72nd wedding anniversary.

Bonnie, and husband Garyl, served for ten years as Temple workers in the Boise, Idaho Temple of the Church of Jesus Christ of Latter-Day Saints.

Important interests in her life, other than dedication to family and the gospel, included music literature, sewing and art. She filled her life with service to her family and others.

Having our family sealed to us in the Idaho Falls Temple of the Church of Jesus Christ of Latter Day Saints in the spring of 1959 has given us the assurance that we are an eternal family with the firm knowledge that we will have our Bonnie with us once again.

Bonnie was proceeded in death by her parents and stepfather, her sister, Barbara Roza, her daughter Laura Grimes McGlenn and granddaughter Michelle Hochhalter.

Special thanks to Hospice- Roberta and Jessica and a sweet and loving caregiver. Tammy, we love and appreciate them. Special thanks to granddaughter Nicki Anderson with Petals and Paper for the beautiful flower arrangement.