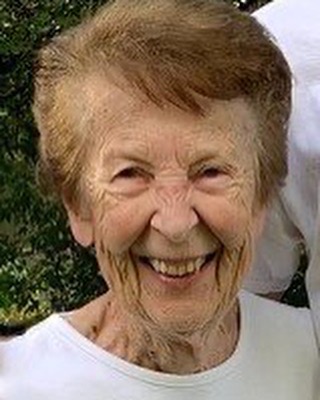 Beverly Buttram passed away December 26, 2021. She is survived by her children, Cynthia & Stuart, her grandchildren, Zachary, Kyle, Clara, Ethan, & Lauren and  Neil, the love of her life & devoted husband of 59 years to the day.

Born July 27, 1932, in Dallas, Oregon to Henry & Mildred Kliever. Beverly had one younger sister, Naomi. She grew up in Dallas, attending the Evangelical Mennonite Brethren church.  For 10 years, she played both piano & organ for their services.  One of her favorite memories was of caroling throughout the community with a young church group every Christmas eve.

In 1950 she began undergraduate English degree at Willamette University. Upon graduation, she taught at both Newberg High & Cloverdale High. She left teaching in 1959 to earn a masters in English at USC in California.  It was there that she met her husband, Neil, who was pursuing graduate degrees there.  They lived in the same apartment building near USC. After 3 years & their degrees earned, they married on December 26, 1962 in Dallas, OR by Beverly’s uncle, Rev. Milton Marcy.

Their son Stuart was born in November of 1963 & their daughter Cynthia in October, 1966.  They moved up & down California for Neil’s work, eventually taking their adventures to Scotland in the mid 1970s where Neil worked on the North Sea oil development. She enjoyed traveling throughout Europe while there. They moved back to Bakersfield, California in December, 1978. It was there that Beverly renewed her love of choral singing by joining the First Presbyterian Church choir & the community chorale. She also continued her love of travel, accompanying church groups to places like Spain, Scandinavia & Switzerland.

Neil’s work moved them one last time to Midland, TX where she again joined a community choir. Upon Neil’s retirement 1992, they ventured to Boise, ID to enjoy the high desert environment amid mountain beauty. Beverly again joined a choir at Whitney Methodist, as well as the Women’s Chorale that rehearsed there. Their beautiful garden was imagined & curated by her; she maintained & added to it year to year. Many in the neighborhood commented on the attractiveness of their yard. Beverly will be sorely missed: her thoughtfulness, generosity, creativity & hospitality.