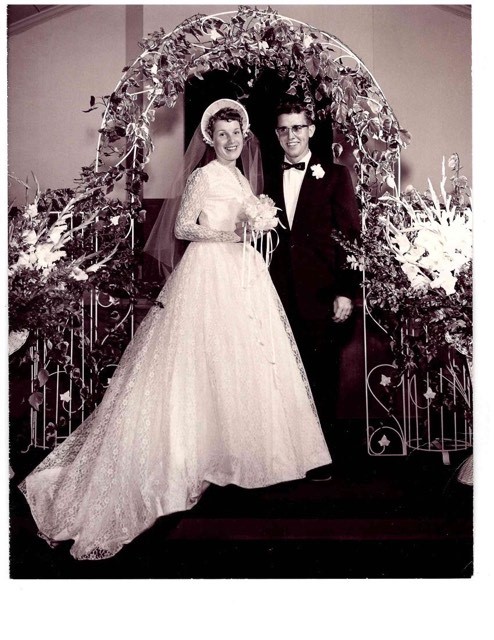 Barbara Ann Gempler was born in Fort Worth, Texas on March 4th, 1936 to her loving parents Florence Maybelle (Bruce) and Kenneth Gideon.

She passed from this life to the next due to complications of Parkinson’s Disease in the wee morning hours of Tuesday November 26th, 2019, almost 10 months to the day after losing her beloved husband Dick Gempler.

Barbara told childhood stories of a traveling life of adventure as the family followed her Dad’s search for work, sometimes living in one room dirt floor tents and traveling from town to town in a covered wagon. She fondly recalled how her mother Florence (Granny) would somehow make her family the most delicious food on a wood stove with almost nothing in the cupboards. Their family’s traveling adventures led them ultimately to California as a teenager where she met the love of her life Richard (Dick) Gempler at a roller skating rink. Dick and Barbara were married in August of 1956 and celebrated their 62nd Wedding Anniversary in August of 2018, shortly before Dick’s passing. Together Barbara and Dick raised four children, Scott, Gregory (Greg), Elizabeth (Beth) and Jennifer (Jen).
Barbara was a dedicated and supportive wife when Dick’s military service took the family to many towns and Air Force bases in the United States as well as Japan. She played the role of single parent to their 4 rambunctious children while her husband, Dick, completed two tours of duty in Vietnam  as an Aircraft Electrician in the US Air Force. She was also a supportive wife when, after retiring from 20 years service in the US Air Force, Dick’s heart’s desire was to relocate their family to Boise, Idaho in 1974 to be close to where his 3 brothers, Lyle, Robert and Thomas, and their families lived.

Barbara was a beloved daughter, wife, mother, sister, grandmother, aunt and friend. She was fortunate to be a stay-at-home mother while her children were little. Once the kids were older, she worked at Hewlett Packard for a time as well as Meadowgold Dairy and Heritage Reflections.  Though she enjoyed those jobs, she was an entrepreneur at heart.  Barbara did some research and was drawn to the Scottish heritage on her mother’s side discovering that they were from the “Bruce” clan (her grandfather was born in Scotland).  She began looking for anything and everything Scottish to purchase and was disappointed to find that there were no stores carrying such things in the Boise area so she started a fitting business, the little pink store on Emerald St. called ‘Wee Bit O’ Scotland’. She enjoyed the people she met through her little store and all things Scottish, even to the point of being part of the group that started the Treasure Valley Highland Games and Celtic Festival which celebrated its 23rd year in 2019.  As her health declined, she had to sell her beloved store but had such fond  memories. She and Dick also owned and operated Crystal Cubes of Treasure Valley, a local provider of cubed and block ice, for many years.
Barbara loved her family beyond measure and Heaven has received a Good and Faithful Servant.
Barbara was preceded in death by her parents Kenneth and Florence (Bruce) Gideon, her brother Kenneth Jr. (Bud), brother-in-law Robert “Bob” Milligan, brother-in-law Robert “Bob” Gempler, brother-in-law Lyle Gempler, sister-in-law Joann (Brown) Gempler and two of her children, Scott A. Gempler and Elizabeth (Beth) A. (Gempler) Schmidt.
Barbara is survived by her son Scott’s family, (grandson) Josh Gempler and his daughter (great granddaughter) Emily Gempler, (grandson) Troy and Crystal Gempler and their sons (great grandsons) Anthony and Tommie Gempler, (grandson) Curtis Gempler and his son (great grandson) Scott Gempler,  stepgranddaughter Mindy and her husband Rick Quinby and their children Ricky III and Jenna Quinby, stepgrandson Phillip Bingham, son Greg and his wife Kelly, their four children (grandson) Jeremiah Gempler, (granddaughter) Heidi and Jeremy Wilson and their 3 sons (great grandsons) Eli, Blake, and Jett Wilson, (grandson) Matthew Gempler and (grandson) Andrew Gempler.  Her Daughter Beth Schmidt’s Family, (granddaughter) Lindsay Schmidt and her daughter (great granddaughter) Jazzy Schmidt, (grandson) Max and Rebecca Schmidt and their children (great granddaughters) Paisley and Phoebe Schmidt and (great grandson) Dean Schmidt. Her daughter Jen Gempler, Jen’s daughter (granddaughter) Summer Weisshaupt and her daughter (great granddaughter) Bree. Her sister-in-law Carol Zakrzewski of Sioux Falls, SD and her family and brother-in-law Thomas (Tom) and Linda Gempler of Boise, ID and their family. Her favorite sister Jane Milligan of Bandon, OR and her family. Her baby brother Fred and Nancy Gideon of Redding, CA and their family. Barbara had some very special nieces that she was close to, daughters of her brother Ken ‘Bud’ Gideon, Tami Gideon Weske of NC and her family, Valerie  Gideon Conner of Sacramento, CA and her family, Lisa  Gideon Johnson of San Antonio, TX and her family.  Barbara has many wonderful and loved nephews, nieces and cousins on the Gempler side of the family,  her Gideon side of the family and, of course, the wonderful friends that are like family that she and Dick have made together along the way and over the years.

Many thanks to Barbara’s wonderful care givers, nurses, doctors and staff at The Idaho State Veteran’s Home and, for the past few months at Brooklyn House where she was able to go ‘home to her house’. Thank you to all who gave Barbara the best care, respect and love!

Family and friends are invited to celebrate Barbara’s life at a Memorial Gathering with light refreshments and finger foods at Foothills Christian Church 9655 W State St, Garden City, ID 83714 (near Bowman Funeral Home on State Street) on Monday December 9th, 2019 at 6pm.  Please stop by and bring a favorite memory of Barbara with you to share if you would like.

We are eternally thankful that we have ‘hope’ that we will all be together again one day!