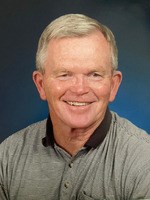 Aubrey Stuart “Stu” Coyle Jr. passed away peacefully on Thursday, July 23, 2020, with his family by his side, after a long battle with Lewy Body Dementia, a disease that would never let him win.
He was born February 4, 1941, in Schenectady, New York, to Aubrey Stuart Coyle and Ruth E. (Thibodeau) Coyle. His family moved to Texas when he was a young boy. He graduated from Conroe High School in Conroe, Texas in 1960 and graduated from Baylor University in 1965 with degrees in Management and Economics.
Stu joined the Air Force after graduation and served for 20 years. After his retirement, he continued to serve his country in Civil Service for 15 additional years before he retired in 2004.
Stu met the love of his life, Jan Berger, in 1971 while stationed in Mountain Home, Idaho. Married for 49 years they were blessed with three children. Adventure took them around the country and the family enjoyed a life in the outdoors and traveling the American West. After retirement he and Jan traveled to several countries in Europe and enjoyed a dream of a lifetime vacation in Australia and New Zealand.
While fishing, hunting, hiking and camping were his passion, he was also a fitness enthusiast. A powerlifter and football player in his younger years, a day rarely went by in his life where he didn’t work out in some form or fashion. He grew up around cattle, competing in the state dairy cow judging team in high school and raising cows as a hobby as an adult. An avid duck hunter, he trained several Labrador Retrievers and entered them in Field Trials while in Alaska. Stu had the greenest thumb in southern Idaho; his annual garden was the envy of all who saw the fruits of his labor. Stu was devoted to a life of faith and served as a deacon at First Southern Baptist Church in Mountain Home, Idaho and Cherry Lane Baptist Church in Meridian, Idaho.
Stu was preceded in death by his parents and brothers James (Jimmy) Coyle and Richard (Dick) Coyle. He is survived by his wife of 49 years, Jan, and their children, Rebecca Coyle Anderson and her husband, Ed, of Boise, ID, his daughter Judy Coyle of Seattle, WA and his son Drew Coyle of Coeur d’Alene, ID. Three grandchildren were his joy: Conner Coyle, Aubrey Anderson, and Elyse Anderson. He is also survived by his brother, Timothy Coyle (Jodie) of Georgetown, TX; and sisters Carole Boyd (Maston) of Pelzer, SC; Marcia Coyle of Sun City Center, FL; Mari Lynne Ryan (Tim) of Vienna, VA; and Cathy Nichols of Anderson, SC; his sister-in-law, Mary Margaret Coyle of Conroe, TX; his sister-in-law, Carol Deese Coyle of Bethlehem, GA; his brother-in-law Richard (Dick) Berger (Lucille) of Snoqualmie, WA; and his brother-in-law Frank Berger (Marie) of Camano Island, WA; and many nieces and nephews.
A memorial service will take place on Thursday, July 30, 2020, at 11:00 AM at the Idaho Veterans Cemetery, 10100 North Horseshoe Bend Road, Boise, ID. Pastor Clint Henry will preside.
In lieu of flowers, the family requests donations to the Lewy Body Dementia Association (www.lbda.org), or the Okoa Refuge in Masaka, Uganda (www.okoarefuge.org).
We will be honoring Stu’s life with traditional military services; the service will be live-streamed.
Condolences may be left at bowmanfuneral.com.