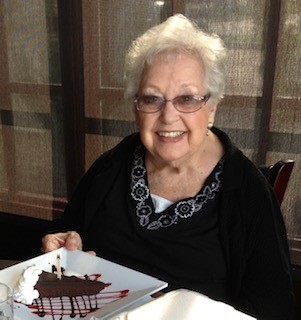 Ann passed away in Boise, Idaho at the age of 97 and will be missed by her family and all that knew her. Ann was born in Seattle, Washington to Norwegian immigrants and grew up in the Ballard area in a house her father built. She graduated from Ballard High School and soon after worked for the telephone company. Ann married Tom Matthews toward the end of World War II and soon after had two daughters, Sherry and Patricia.
Like most women of her era, she was a homemaker. But, she had an artistic talent that she pursued whenever she could. She was a very good portrait artist and had times been different, she would have followed that dream. Ann worked at the 1962 Seattle Worlds Fair doing quick portraits, which earned enough money to buy her first car.
She loved the independence that gave her.
During her life, she loved traveling. Hawaii was one of her favorites along with many cruises with her second husband, Charles Mallett. She also took several long trips to Norway to visit with her extended family there.
Ann, was preceded in death by her father Fred Martinson, her mother Laura Draagen Martinson, brother Stanly and sister Esther.
She is survived by her daughters, Sherry Neifert (Dennis), Patricia Kane (Michael).
Grandchildren: Dan Neifert(Michelle), Jennifer Neifert, Sarah Williams (Teo), Kelly Ann Malfettone (Tom), and 8 great-grandchildren. She is also survived by two cousins in Norway, Beate Lysgaard ,Elfrid Gausetvik and all the extended family there.
The family wants to say a special thank you to all the caregivers at Plantation Place.
Because of your TLC, Ann had joy and dignity in the last years of her life. We are forever grateful.