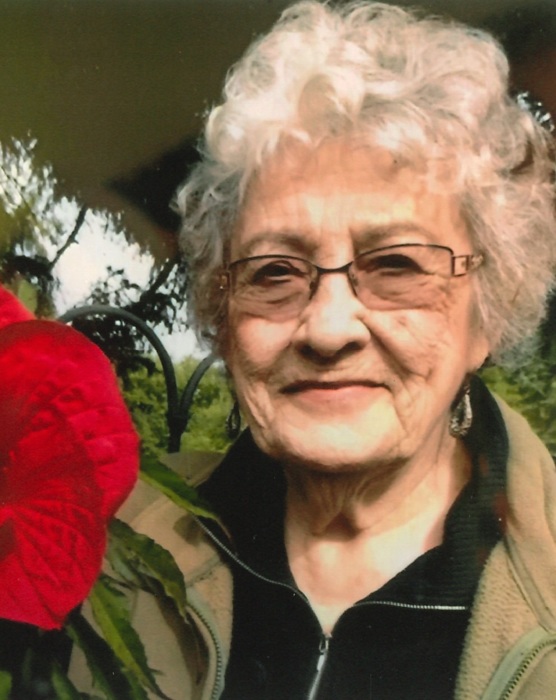 Angie was born in Elko, Nevada and grew up on a ranch in the Ruby mountains near Lee, Nevada where her father Pete Barinaga Sr. and mother Elvira Pena Barinaga instilled the values of hard work, frugality, and family loyalty. With her siblings, Pete Jr, Albert, and Rosie, lifelong memories and lessons were formed and deeply rooted in their early years on the ranch.

She received her education in a one room school house right on the ranch. The “real” school of life taught her even more. Angie could harness up a team of horses and worked side by side with her father in the hay fields. She learned gardening skills and homemaking from her mother. She was an accomplished horsewoman. As a young girl her secret ambition was to become a trick rider on her horse “Bullet”.

At a fair in Elko, Nevada, Angie’s beauty caught the eye of her future husband, Lauri Uriona. After a brief courtship they were married in Elko in 1947. They settled into Grandview, Idaho where Lauri was working for Wood Creek Sheep Company. Together they welcomed three children, Gloria, Irene, and Phillip. Although they later divorced they remained lifelong friends.

Friends and family will remember her good sense of humor, playful ways, and quick wit. Angie was known to be strong willed and feisty. She loved and appreciated nature and all its beauty, especially the mountains. In 1970 Angie married Henry Viscarret in Virginia City, Nevada. Living in Reno together they raised his five children, Lita, Hank, Chris, Laura, and Garth. Henry and Angie enjoyed traveling to various states for his Navy reunions. They had many happy years together.

Following Henry’s death, Angie moved to Boise and led a life of service, helping care for her mother and brother Pete with much love and selflessness. The bedrock of life will always be love!

At Angie’s request there will be no services. Instead of flowers, as you remember the life of Angie, perhaps give someone in need a helping hand or a small act of kindness. “Millions of trees in the world are accidentally planted by the squirrels – who bury nuts, then forget where they hid them…Do good and forget. It will grow someday!”