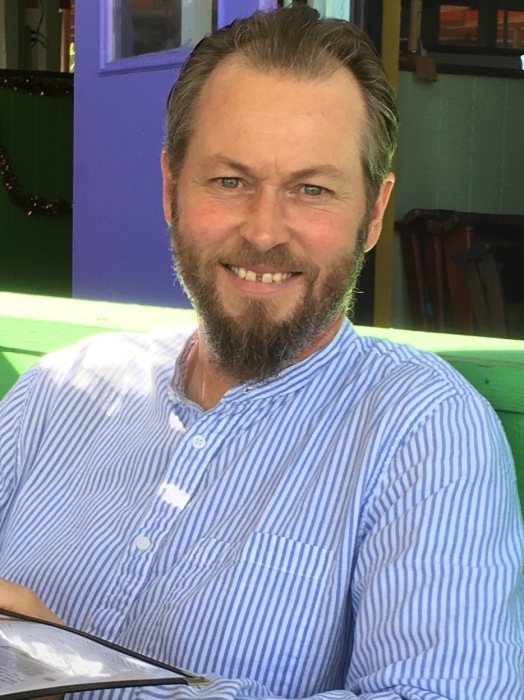 Andrew was born on January 26, 1972, in Bromsgrove, England. When Andrew was 11, his family moved to Herefordshire, England. In June 1991, he received his craft certificate in carpentry and joinery from Herefordshire Technical College.

A music lover, Andrew traveled to the U.S. in 1994 to see one of his favorite bands, Pearl Jam. His travels brought him to Idaho, where the joy of riding his motorcycle in the mountains inspired him to relocate to Boise and begin an apprenticeship with Bolin Guitars, becoming a master luthier craftsman in an art form progressively being supplanted by technology.

Soon after moving to Boise, Andrew met Roger Veage, a music industry veteran and guitar technician who encouraged Andrew to become a guitar technician in 2001. Andrew’s free-spirited nature relished the opportunity to travel the world, touring with legendary musicians and making lifelong friendships over the next 15 years.

Weary of life on the road and ready to resume his passion of building beautiful guitars for people who love to play, Andrew returned to Bolin Guitars in 2016. Later that year, Andrew met a travel nurse, Kris Adcock, and love quickly ensued. Exactly two years later, Andrew proposed, and they were married on October 27, 2018, at a beachfront ceremony in Englewood, Florida, near Andrew’s parents’ home.

Andrew and Kris made the most of their short time together, traveling to Australia, Belgium, England and many locations all over the U.S. As much as they enjoyed exploring the world, they most loved spending time with their dog Ozzy in their home together in Boise and at their cabin near Robie Creek.

Handy and resourceful, Andrew could build or fix anything, and he never shied away from a challenge. His intelligence was matched only by his dry wit, and he took great pleasure in being cultured and staying informed on world news and current events. He enjoyed leathercraft, creating amazing handmade shoulder bags and men’s wallets that he tooled, stitched and stamped himself.

Fearless and fast, Andrew was an avid motorcyclist, owning both on- and off-road bikes and riding with great skill and speed. He also loved camping and boating with friends at Red Fish Lake and hiking in the Boise Foothills with Ozzy.

As Andrew’s good friend Devan Skaggs recently stated, “he lived with stage 4 cancer for years, and did it with more grace and humor than most people live a normal day.” He never let his diagnosis define him or stop him from doing what he loved to do.

Andrew is preceded in death by his mother Catherine Jones and his brother Scott Jones. Survivors include his wife, Kris Jones of Boise; father and stepmother, Raymond and Sue Jones of Englewood, Florida; brother and sister-in-law, Adam and Sarah Jones of Herefordshire, England; niece and nephews, Katie Jones, Cameron Jones and Harry Reese of Herefordshire, England; and his cherished extended family and friends, including the Bolin family of Boise, with whom he was very close.

A memorial will be held Thursday, Sept. 19th at Camels Back Park in Boise at 6 p.m.

In lieu of flowers, donations can be made to The Huntsman Cancer Institute, University of Utah (you can designate to donate to the melanoma/skin cancer dept. with a gift in Andrew’s name) http://thehuntsman.org/give