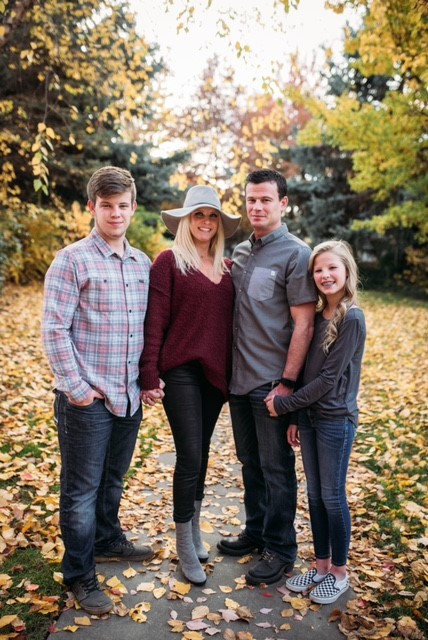 Amy Jean Sisco was born March 19, 1974 to Lani and Lee Sisco in Boise ID.  She attended Mtn.View Grade School, Fairmont Junior High and Capital High School.  She was always a VERY social person….like too social.  There were more than one parent/teacher conferences.  She participated in T-ball, soccer, gymnastics, dance, dance, more dance and cheerleading. She met David Zachary Evans (Zach) her junior year in high school and both graduated from high school in 1992.

While taking her state exam for licensing as a radiology technician, she suffered her first episode of numbness on one side of her face and extreme fatigue.  Several more of these symptoms occurred in different parts of her body with an MRI and spinal tap revealing a diagnosis of Multiple Sclerosis at the age of 23.

After dating for six years, she tried to set the love of her life free, but Zach decided to go the distance saying, “Nope, I’ll be with you ’til the end, Babe”.

They proceeded to plan their wedding for August 1, 1998.

Due to the diagnosis of MS, Amy decided that a full time job may not be the best for her.  At the time Zach was building homes as Zach Evans Construction – ZEC and she began helping the home buyers with their selections for their new homes.  It became apparent that Amy had quite a gift for design.  Together, they made a great team, winning many awards for their homes.  She continued working with Zach until 2015 as they developed their style of signature homes.  She is very proud of the fact that she was a key team member in making ZEC the successful company it is today.  Her name is still mentioned in the design community and previous customers continued to thank her for helping them with their homes.

Through a series of fortunate events, Amy was able to receive a life saving stem cell transplant treatment in Chicago on January 12, 2015. The procedure was considered a trial and not yet approved by the FDA.   The treatment was successful and Amy lived the last six years free from Multiple Sclerosis!

After her transplant treatment, Amy decided to retire from the business and spend more time with her children, Garrett and Ryan Michelle.  Garrett is now 20 years old and working in the business.  Ryan Michelle is a junior in high school.

She is preceded in death by her grandparents; Lona Jean Stewart Burns and Willard R Burns and Marie J Sisco and Harold Glenn Sisco.

In lieu of flowers, please make donations in Amy’s honor to the charity of your choice.