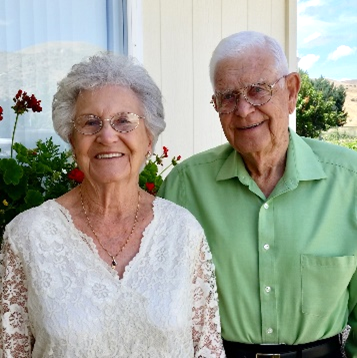 Alvin (Papa) was born on August 7th, 1925, in Boise Idaho to Lon and Goldy (Sailor) Rose. Vanita (Mimi) was born December 4th, 1924, in Pierre South Dakota to Orville and Irma (Thompson) Snowden.  Alvin and Vanita met in junior high and had their first date on New Year’s Eve 1940.  During WWII, Alvin left high school to attend aircraft mechanics school, then joined the Army Air Corps.  He came home on leave and he and Vanita were married May 18, 1944.  The had enough gas rationing coupons to get from Boise to Nampa and back for their honeymoon.  They were a couple for eighty years.

From the time he was a kid Alvin had a job. He was a paper boy, milk man, worked at a service station, at the Post Office, and was a prospector for the U.S. Bureau of Mines.  However, the job he liked best was mill superintendent for Porter Brothers in Lowman, Idaho.  (Their life in Lowman would require a book to describe).  His “career” was established in the trucking industry with his final job before retirement as terminal manager for ABF in Boise.  Vanita worked as a retail clerk at CC Andersons in Boise, then as a mom, grandma, and home maker.  She later worked for Peterson Dental Lab in Boise and volunteered at St. Lukes gift shop for many years.  After Alvin retired, they spent winters in Quartzite, Arizona, with the rest of the time in their Boise home.

Alvin and Vanita maintained almost daily contact and social time with couples that they met in grade school and earlier.  They went camping, hunting, fishing, dancing, eating; did house projects, and just sat around with couples that they had known for 90 years or more.  Truly incredible.  It seems like Alvin knew everyone in Boise, including their parents and children.

Alvin and Vanita are also survived by many nieces and nephews whom they truly loved, friends and the children of their many lifelong friends that looked upon Alvin and Vanita as second parents.  When you have to call the waitress at the Chinese restaurant that they liked and go see the manager of their favorite Mexican restaurant to tell him that Alvin has died and he cries, you know how many lives they touched.  Al and Vanita never met anyone they didn’t like.

Interment of Alvin and Vanita will be attended by immediate family members, with military honors for Alvin.  A celebration of life for both will be held on Tuesday July 6, 2021, 12:30 PM at River Club Boise, 6515 West State Street. Light hors d’oeuvres served.

Interment of Alvin and Vanita will be attended by immediate family members, with military honors for Alvin.  A celebration of life for both will be held on Tuesday July 6, 2021, 12:30 PM at River Club Boise, 6515 West State Street. Light hors d’oeuvres served.